THERE’S something about TGI Friday’s that makes you want to smile … it could be the colourful, contemporary and funky decoration, friendly members of staff, the party atmosphere, or, more importantly, the food.

There are many alternatives in the marketplace but few can tick all the boxes like this company which first collared the casual dining scene in the 1960s and to this day still manages to make the family eating out experience memorable and full of fun.

We were occasional visitors to the franchise back in the UK where a visit was a treat after a trip to the cinema. However, it was the Szecowka family’s first visit to the restaurant at City Centre Bahrain and we brought little Stan’s pal, Luke, along too.

It must have seemed like a school outing for them, as a party from the same year group at St Christopher’s School was enjoying Kaloyan Milanov’s 12th birthday celebration on a neighbouring table.

The Friday lunchtime was buzzing (I know, I had to try it on a Friday despite the banner which read: in here, it’s always Friday) with mall shoppers and a few devotees who head each week for a meal, local celebrity faces such as champion bodybuilder Sami Al Haddad amongst them.

The menu contains a range of family favourites and there was a complimentary ‘by popular demand’ alternative too featuring promotional dishes which I understand are updated every couple of months.

We shared the Seafood Platter appetiser containing a medley of golden fried calamari, white fish and shrimp costing BD5.300 which was big enough for us all to dive into, although there were plenty of alterative starters and half portions from BD1.500, including some tempting stuffed mushrooms which I plan to savour on my next visit.

The boys backstage were on song, well organised under the watchful eye of Danica Vilappana, a Friday’s stalwart of 17 years note in Bahrain alone, and six at this location.

There was impressive teamwork, from the preparation to the cooking and on to the plate presentation.

I had been urged by my ‘man in the know’ – an American meat importer who shall remain nameless, that I must not miss the opportunity of trying the steak or the ribs.

I’m so happy I took his advice as my Chop House Filet (BD8.750) wrapped in beef bacon, topped with balsamic caramelised onions and served with fresh vegetables alongside cheddar cheese mashed potatoes, was superb.

Cooked to my preference of medium rare to perfection, I’ve paid a lot more for a lot less quality at five star establishments.

The boys went for the ribs and more seafood although they were tempted by the selection of chicken and pasta dishes available too.

I should have gone for the salad, I know, but temptation got the better of me as did the Chocolate Peanut Butter Pie at BD2.950 on the specials menu. Wow, it was good.

Kathryn and Luke got quickly stuck into the Molten Chocolate Cake (BD2.750), a moist, fudgy firm favourite topped with pecans and sauce and ice cream, whereas my son declined, having had his fill and showing an iron will his father could only dream of. 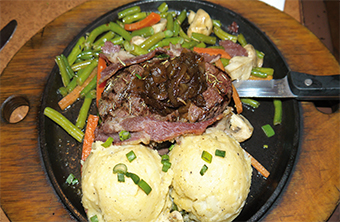