IF it’s a frenzy of all things fish you’re after, then you will not be disappointed with the delicacies on display at one of the most well-established specialist seafood restaurants on the island.

La Perle at the Novotel Bahrain Al Dana Resort has long dipped its hook in the fish market concept and, to be honest, I’m happy to report they’ve finally got me hooked.

It’s in a stunning location by the sea and restaurant-goers can enjoy dining under the stars, listening to the sound of the waves lapping up on the beach, or settle inside without losing the ambiance thanks to the full-length glass windows at the venue.

The service is attentive, the waiting staff friendly and knowledgeable and the experience, from the moment we stepped through the door, was memorable for all the right reasons.

Our relationship has not always been plain sailing and if I’m going to continue with a nautical theme, it’s fair to say stormy just about covers it.

A hurricane hovered in the vicinity on our previous visit and I really wished I had sailed on straight by. It has taken me more than six years to forgive and forget after being presented with a disastrous dish drowning in the most foul-tasting sea of sickly butter.

When I complained at the time I was dismissed with a sneer and a shocking sentence of ‘well that’s the way we cook it here’.

Well, in that case you won’t be seeing me here again’ was my prompt retort.

And, I held true to that vow until last weekend following a conversation with another scribe at a recent hotel opening, who was singing the praises of La Perle and the excellence of its current head chef, Ali Ismail.

Originally from Syria, Chef Ali cultivated his career in five-star hotels as an Arabic chef and has been described as a ‘very humble and touching character’ who cooks from the heart in a very homely-style.

Having joined Novotel Al Dana a little more than a year ago his mantra is simple: ‘a chef should cook to please’, I was told.

It was just my bad luck to find out that on Thursday evening Chef Ali had finished his shift by the time the good lady wife, Kathryn, and I, arrived. He would have been proud that his motley crew, led by Indian Chef de Partie Vijay Devaraj, was well up to the task of dazzling us.

The choice of seafood on the icy rocks was quite dazzling. On display were Red Hammour, Sherry, Fasker, Safi, Solos, Sultan Ibrahim and Dori, alongside jumbo prawns, salmon, black mussels, crabs and clams.

You can net as much as you like for a mere BD15 (BD22 for an added selection of beverages) and diners could also splash out extra on lobster too, for example, priced by the weight.

A warming bowl of Tom Yam soup, and a small selection of shelled delights with superb seasoning set us up nicely for the main course to come.

The flesh from the large selection of fish we chose was fabulous, slipping off the bones in flakes full of flavour.

It was signposted clearly that a selection of cooking sauces were available for the customers to pick should they wish to. Progress with a capital P!

Tahina, Lemon Garlic, Piri Piri and Tartare sauces were served at the table separately. And you could choose the cooking style – grilled, fried, baked or steamed and pick extra sauce flavours such as Thermidor, sweet and sour, lemon butter and thai green curry.

Restaurant Manager Sami Rabah convinced me to sample one fish dish cooked to perfection in a chili sauce and it was sensational.

The presentation of the food could also not be faulted – even the side dishes of rice and vegetables looked impressive on the plate.

I would be hard-pressed to find a fault and if I was to be particularly picky my advice would be to label the array of sweet dishes, because they looked good but I had no idea what they were, even after a small sample passed my lips.

Nonetheless, an evening of fabulous fare in superb surroundings … and we’ll be docking in again within weeks, not years – that’s a promise. 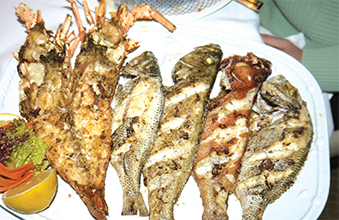