Lest we forget, Joseph

A British serviceman whose final resting place was the Old Christian Cemetery in Manama will be remembered as part of a unique endeavour by residents of his home town to honour fallen heroes no matter when they lie … anywhere in the world.

Warrant Officer Joseph Arthur Castle, who received the British Empire Medal for his service six years before he died in action at the age of 33, was buried in Bahrain on September 9, 1957, in row 30, grave 15. He lies between the grave of a 21-year-old flying officer and a plot marked simply RIP (rest in peace).

“I would like to visit the cemetery and place a cross on his grave some time in December as I’m visiting my son and his family in Doha for Christmas,” said Adrian Dite, who is supporting the Thame Remembers initiative and it is hoped GulfWeekly readers may be able to fill in missing details about the circumstances surrounding Warrant Officer Castle’s fate.

Thame is an English market town in Oxfordshire boasting award-winning shops, restaurants and cafes. Picturesque, it boasts a wide variety of buildings of historical and architectural interest with thatched cottages and timber-framed dwellings blending with Georgian and Victorian buildings.

Mike Dyer is project co-ordinator and a founding member of Thame Remembers, run in partnership with Thame Museum Trust and Thame Town Council, and he explained that its mission is ‘to commemorate the centenary of World War One (WW1) by researching all the names on Thame War Memorials, for all conflicts, to discover more about their lives, to identify the location of their grave or memorial, and to place a Thame Remembers cross on each resting place; wherever in the world that may be’.

Like many good ideas, it started over a chat between friends and was the brainchild of his town council colleague and former mayor, David Bretherton. “The challenge immediately appealed to me,” said Mike, “so the two of us decided to make it happen and set about raising the funding and starting the research.”

They put in about six months of preparation and planning and then launched the project publicly on August 3, 2014, the centenary of the eve of the outbreak of WW1.

“We started with a list of 189 names, remembered at graves and memorials in 23 countries over four continents – a list which has now increased to 213 with the discovery of more casualties from Thame who were somehow missed off the town’s war memorial,” added Mike.

“The community has responded magnificently and in the first 15 months of a four-year project (ending 11.11.18) over 60 per cent of the men have already been commemorated in places as far afield as New Zealand, India, Tanzania, and Singapore, with every cross or wreath having been delivered by somebody from Thame.

“Of course, the remaining ones include some of the most difficult, such as Libya, Iraq … and 12 shipwrecks … so a considerable challenge remains.

“Regarding Warrant Officer Castle, we do not yet have a great deal of information but, now that Adrian has stepped forward and volunteered to deliver a cross to his grave, our researchers are now prioritising and we hope to be able to paint a fuller picture within the next few weeks.

“More research clearly needs to be done and, amongst other questions, why was he buried in Bahrain?” said Adrian. “It is, of course, possible that local sources in Bahrain may also have information to contribute.”

The Very Reverend Christopher Butt, Dean of St Christopher’ Cathedral, has already stepped in to assist by locating and sending Thame Remembers images of the grave.

Last week he placed a poppy by the fallen soldier’s gravestone after the Remembrance Day Service at the cemetery which was attended by the Minister of Foreign Affairs Shaikh Khalid bin Ahmed Al Khalifa, numerous ambassadors, members of the military, visiting Chelsea Pensioners, alongside representatives of local clubs, societies and schools.

For the moment, the Thame Remembers team has found out that 5392839 Warrant Officer Castle was one of the 371 British servicemen who died on active duty during the Cyprus Emergency and whose name is remembered with honour on the British Cyprus Memorial.

The Cyprus Emergency was a military action that took place in British Cyprus primarily consisting of an insurgent campaign by the Greek Cypriot militant group, the National Organisation of Cypriot Fighters (EOKA), to remove the British from Cyprus so it could be unified with Greece. Both the British and EOKA were in turn opposed by the Turkish Cypriot group Turkish Resistance Organisation, who rejected union with Greece. It led to Cyprus being granted independence in 1960.

Serving with the Royal Engineers, Warrant Officer Castle was killed on September 20, 1957. The group have also found an entry in the London Gazette of January 1, 1951, recording that he had been awarded a British Empire Medal (Military Division) in the King’s New Year Honours List.

The Corps of Royal Engineers, usually just called the Royal Engineers, and commonly known as the Sappers, is one of the corps of the British Army. It is highly-regarded throughout the military and especially the Army. It provides military engineering and other technical support to the British Armed Forces. The corps is divided into several regiments, barracked at various places in the UK and around the world.

The Royal Engineers trace their origins back to the military engineers brought to England by William the Conqueror and claim over 900-years of unbroken service to the Crown. 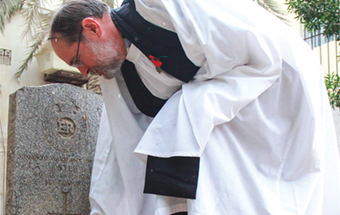 Lest we forget, Joseph