A Crust above the rest

Every phase of a person’s life, or at least this ravenous reporter’s life, is betoken by a specific food or a set of foods – comfort cuisine to which one keeps reverting for convenience and/or flavour.

For me, university came with an aromatic accoutrement of pizza and coffee. In Canada, both of these are so convenient that each has their own sensory spectrum varying from quick and dirty corner shop varieties all the way to the ethereal aromas of a fine gourmet hipster establishment.

So when I was told that I’d get a chance to revisit these days with a review of the Crust & Crema (C&C) in Seef, I was exuberant to say the least. And since our review fell smack in the middle of our work week, it was the perfect time to add a scrumptious boost to aid me in my writing.

As some of you may remember, last week, we had visited the C&C to have breakfast with the team from Al-Haddad Motors. This time however, we stopped by to see if they lived up to their name and had, in fact, the best crusts and finest crema on the island.

While unassuming from the outside, as I stepped into the C&C lobby, I was greeted by the distinct delicious aroma of a perfect medium roast coffee, the sight of the restaurant’s magical mushroom Neapolitan pizza oven and of course, the 100-watt smile of our host for the afternoon, café supervisor, Alvin B Maraña.

As we perused the menu, I took a moment to chill out and engage in my favourite of hobbies – people watching. I almost shed a tear of joy as I stole glances at the students sprinkled across the café.

Some had papers strewn across the table as they scribbled away, presumably solving some of life’s greatest mathematical mysteries like how roasted does a journalist have to get for each scoop. Others chatted nonchalantly while their caffeine-powered fingers danced across keyboards probably penning the next great novella, thesis or pizza-inspired poetry. I reminisced about my days of study, spent in the warm interiors of the university food court, often anxious about an upcoming deadline yet never too distressed to enjoy the first sip of coffee or the first bite of pizza.

The thought of pizza brought me back to the menu and with Alvin’s awesome aid I chose the Crust & Crema Special (BD4.9) and the Pollo Funghi (BD4.5) as our crusty delights, preceded by an order of the Roasted Chicken Salad (BD3.2) and the Bulgogi Cheesesteak sandwich platter (BD4). And to indulge my inner gluttons and because they were a hallmark of my post-university early 20s, we decided to try the Chicken & Waffles (BD2.4).

For drinks, our barista Carol Cañeso was given free reign and jazzed up our appetites with a Passionfruit cooler, a strawberry lemonade and a Citronade with Korean iced tea (BD1.9 each).

As we waited, I decided to do my third favourite kind of watching, after people and movies – oven watching.

I chatted with Chef Suresh Singh as he prepared the pizza dough for the warm embrace of the Neapolitan brick oven. I was particularly intrigued about the crust since the Woo family, which owns and operates the Crust & Crema restaurants, got their start in culinary entrepreneurship with Bahrain’s famous Korean Bakery, followed by our former editor Stan Szecowka’s favourite haunt, Planet Donut.

And once they had perfected the accessories to the consummate cup of coffee, they decided to expand their dossier of delights to include pizzas and of course, integrated the coffee into their next eatery.

Chef Suresh told me about the process of preparing the dough, all of which is made fresh and onsite to ensure only the best reaches our taste buds, as he sprinkled on the beef bulgogi, three kinds of bell peppers and the fresh mozzarella.

I was excited to try both the pizza and the sandwiches with the delectable meat and they did not disappoint. In sandwich form, the soft bulgogi worked perfectly with the salty and savoury taste of the sourdough bread it was served on, with the cheese acting as a rich binder that sealed in the meat and vegetable flavours. In pizza form, adding to the crunch of the bell peppers, it melted in your mouth, making me return to the plate for “just one more slice.”

The Pollo Funghi pizza was nothing to be scoffed at, either. The chicken and mushroom flavours tangoed in unison with the onions to activate our entire army of taste buds as I washed it down with a sip from my very pink and delicious strawberry lemonade.

The chicken and waffles were also quite delectable. The sweet waltzes with the savoury and meaty, offering a sui generis succulent summit of sensations. It’s definitely worth a try.

Alvin and Carol then stepped in with caffeinated beverages that kicked us back to life after almost falling into a food coma. The chilled Raspberry Mocha Kiss (BD1.9) with a drizzle of chocolate on top was just as exquisite as the hot Spanish latte (BD 2.1), which featured a beautifully crafted foam swan on top.

Just as we finished, the owner Jongtae Woo stopped by to check on us and give us a quick teaser of the coffee lab in the back. Stay tuned, we’ll be delving into that in a future story!

As I zipped off to the Bahrain National Stadium for another story, I grabbed a chilled Spanish Latte to go and with a zap straight from the straw to the spine, I hit the road full yet refreshed.

Check out the Crust & Crema for the freshest crusts and finest cremas on the island, and find out more about what’s roasting in their backroom. For more details, call 17214155. 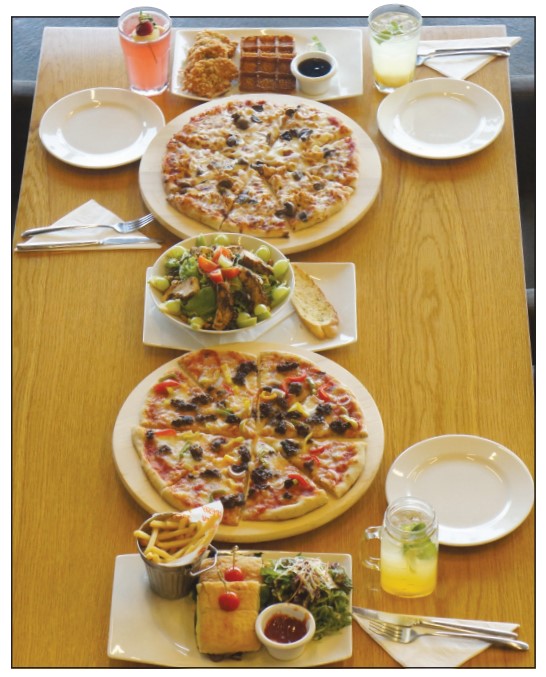 A Crust above the rest