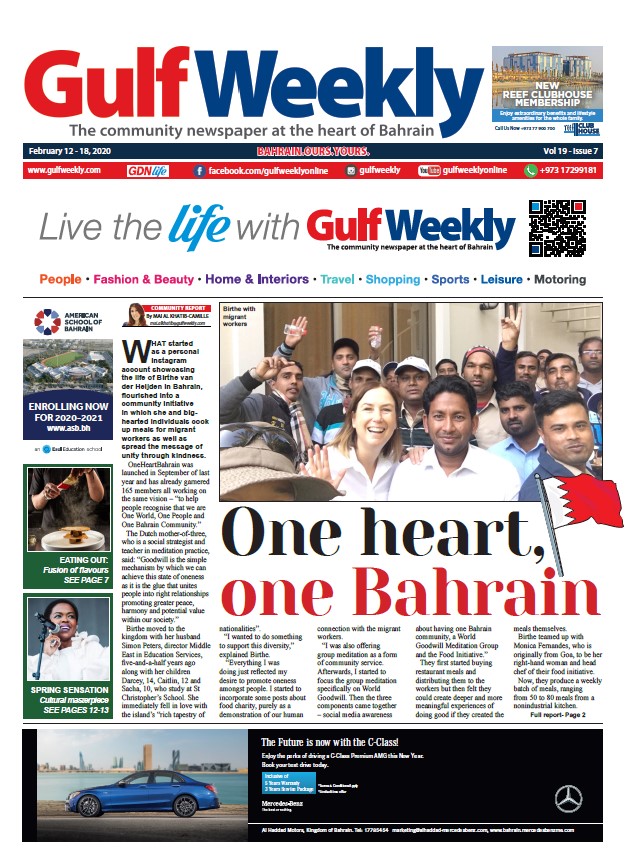 Two of my favourite aspects of this job are the fantastic food and passionate people I encounter on a near-daily basis. Last week, these two met for a lovely evening out at the Four Seasons Hotel Bahrain Bay’s CUT by Wolfgang Puck restaurant.

Both Four Seasons and CUT have a reputation for crafting delectable dining experiences that transcend your normal night out. Your subtlest desires are addressed before you are able to articulate them. And somehow, they must have even known my infinite curiosity about the eponymous Wolfgang Puck. I had heard and read about him, but who really was he? What part of his name does his food and restaurant live up to most? The wolf, the gang or the puck?

So, for my virgin CUT experience, I was pleasantly surprised to find out that the man himself, who was in the kingdom for a couple of days last week, would be running the kitchen.

As we arrived in the evening and were welcomed and seated by the Four Seasons director of public relations and communications, Clare Bromilow, we got a couple more pleasant surprises. The first was that the chef, who is known for his spin on French cuisine, would be giving Bahrain a culinary cut of his origin story going, “Back to the roots,” a menu he crafted along with the second surprise, Lisa Wieland, the Head Chef at Cut in London UK, who hails from Carinthia, Austria, the same region as Wolfgang himself.

My mind, heart and belly abuzz with excitement, we took our seats and impatiently waited for the first course, sneaking a peak into the well-oiled machine of a kitchen being run nonchalantly by the two Austrian artists.

We learned that on the platter for us was a seven-course dinner including a delectable selection of chocolates and after-dinner beverages.

Our wait was short as a kettle of soup along with two bowls with fresh vegetables and meat cuts. The villacher kirchtagssuppe, translated to village festival soup and served with the unmissable raisin brioche bread. A flavourful and smooth medley of spices, and was devoured by myself and my colleague in a heartbeat.

As we waited for the next course and chowed down on some rabbit sausage, topped with mustard and red cabbage, we chatted with Chef Wolfgang about the picture on the back of the night’s limited edition menu. A fun action shot, captured in 2002, Chef Wolfgang is pictured picking vegetables with his pastry chef mother.

He explained: “We were a family of humble origins and every day, we would pick fresh vegetables from our garden for lunch and dinner. I grew up in a culinary environment and the quality of the ingredients was just as, if not more important than the recipe itself.”

In the mean time, the second course showed up. Kårntner kasnudeln mit brauner butter, which was Chef Wolfgang’s grandmother’s recipe for cheese ravioli, was served atop a delicious drip of hazelnut butter. This remains by far one of my favourite courses for the evening, with one big complaint: there were only three pieces.

But that complaint was quickly assuaged as the next course, boneless seabass baked slowly in a fish shaped pie crust and served with a herb tomato vinaigrette, swam its way to our table. Imagine the softest toasted marshmallow you have ever bit into, the fluffiest pillow you ever slept on and the first bite of the flakiest croissant you ever enjoyed. Now layer those imaginations and you might be able to imagine the delectable perfection of this. All my diets were forgotten as the fish and phyllo melted in my mouth.

Next up, the wienerschnitzel mit kartoffel salad, Chef Wolfgang’s personal favourite from this menu, was the traditional Viennese veal schnitzel served with cranberries and I finally understood why they had only served us three pieces of ravioli.

At this point, I had resigned myself to the oncoming food coma but the Wagyu rippchen jägerart (braised beef ribs with mushrooms and dried dates) and the zwiebelrostbraten rotkraut und spaetzle (grilled wagyu sirloin, cooked medium rare, with crispy onions) gave us the main course meaty punch we didn’t even realise we were missing. If you have been reading our previous reviews, you know what a fiend I am for braised beef, but this was a whole new level. The meat thrilled my tongue while the dish names twisted it, and I was on the highway to coma town.

But every chef, especially one as Michelin studded as Chef Wolfgang knows that dessert can never be deserted. The highlight for me was the cheesecake, often enjoyed by royalty, Kaiserschmarrn, which we devoured with some fresh strawberries.

And to top it all off, we left with a wonderful coffee beverage and chocolates to keep us awake and alert, at least until we got home.

The team at CUT were nothing short of spectacular as they made this one of my most unforgettable Eating Out reviews. Do stop by and enjoy their food. As for me, I have been dreaming about this food since the feast and might be too spoiled for the next one!  For details, contact 17115044.