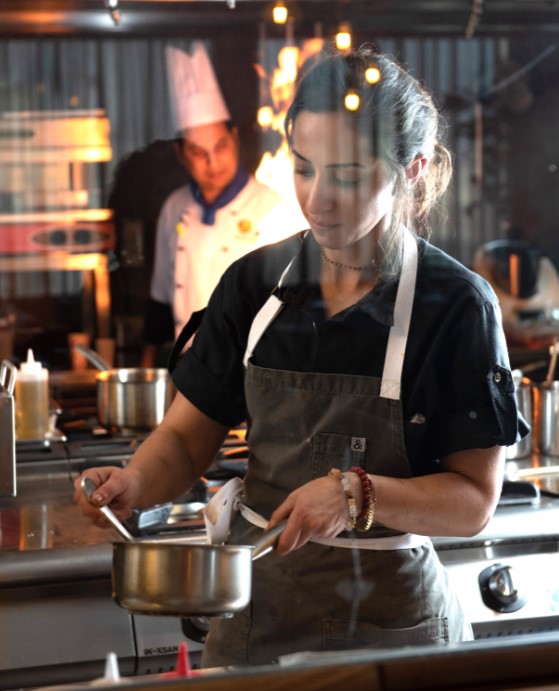 There was a time when Tala Bashmi, former captain of the vibrant Venus football team, was scoring on the pitch and now the talented Bahraini chef is scoring high marks in her kitchen at Gulf Hotel Bahrain’s Fusions restaurant.

The 31-year-old, who competed in the popular reality Top Chef Middle East (TV cooking series), is heading the signature rooftop restaurant, Fusions by Tala, at the five-star luxury property and is doing so flawlessly from what I observed at her pre-launch dinner service event earlier in the week.

The culinary alchemist has transformed traditional Middle Eastern cuisine into contemporary works of art that are whimsical, sensory and nostalgic.

Her creativity knows no bounds as she brought smiles to the faces of lucky first-time tasters during the event that were invited to sample her dishes.

Justin Tomy, Fusions by Tala restaurant manager who shared that the fine dining section can accommodate 45 patrons comfortably, was eager to hear the feedback from the invited guests and Gulf Weekly before tomorrow’s official restaurant opening.

He said: “We are already fully booked for tomorrow and Valentine’s Day but we still wanted to get our guests feedback. How else can we grow?

“Chef Tala selected to serve her surprise menu to guests and people were able to order a la carte too. Fusions by Tala is a truly chef driven concept where Tala creates modern Middle Eastern cuisine. She is a charismatic and energetic person that is young and fresh. You can see all her youthfulness and trendiness in her food too.”

Justin was spot-on as we watched through the glass-walled partitions as Tala buzzed around in her kitchen with her culinary team, whisking, stirring and plating her dishes to be adored by her diners.

I was already impressed by her educational background and skills so I couldn’t wait to see what surprises she had in store in her signature five course tasting menu. Tala attended the Culinary Arts Academy in Luzern, Switzerland for two years and received an MBA in Culinary Management. She interned at in Switzerland at the Les Trois Rois in Basel and Prisma in Park Hotel Vitznau. She joined the Fusions team at the end of September 2018 as senior sous chef before taking up the head chef’s role and responsibilities and officially being appointed three months later. She also received the coveted Gulf Hotel Group’s CEO Award, presented annually in recognition of an ‘outstanding contribution’ to the success of the company by an employee at any level of the organisation in 2019.

Now, lets discuss her artistic craft — her food. I was seated with photographer Honey Sharma and marketing manager Jalal Muradi.

Tala weaved past tables meeting her guests and getting them ready for the flavourful journey to come. The amuse bouche was a variety of cauliflowers and romanesco from Bahrain all from the farmers market on top of a ceralic puree, capers and a couple of foie gras which Tala described as a little explosion of really nice local produce. She started us off fresh!

For the first course, we had sous vide salmon with cucumber and fennel with mehyawa salt. Mehyawa is an Iranian cuisine tangy sauce made out of fermented fish. It is an acquired taste that I personally am not a fan of as it’s usually overpowering. Not in this case though. This salmon was everything! I could have had two more of those salmon dishes and called it a night. It was refreshing, summery and melted like butter.

The next course was the Cheeba which is Bahraini prawn dumplings stuffed with raisins and onions in a tamarind sauce. It was divine. A coconut sorbet with cured egg yolk appeared to cleanse our palette which was another one of my favourites. My main was delish. I opted for seafood while Jalal chose the meaty bamia dish that was tender and juicy. My bouillabaisse curry, featuring octopus, clams and seasonal seafood, was a scrumptious and savoury under-the-sea medley that made me wiggle in my seat. It was flavourful to the last bite.

The evening ended with a fudgy chocolate sponge cake delight with pistachio ganache and salted whey caramel sauce dripped all over the cake. It was the perfect dessert to end the flavourful food voyage. Tala took us on a tantalising trip of the senses. I can’t wait for her outdoor terrace to open up as well.

Check out the restaurant by following @fusions.bh on Instagram and book a table by calling 17713000 or emailing fbm@gulfhotelbahrain.com​ ​

Scan the QR code below to sample the experience.