To lead the American School of Bahrain (ASB), founding director Dave McMaster plans to bring more than his own 31 years in education and 26 years leading schools to the table, writes Naman Arora.

He intends to turn the tables on traditional education with a holistic 21st century approach to education that emphasises fun and engagement while promoting academic rigor as well.

Dave started his path through pedagogy after completing his Bachelor’s degree from Queens University in Canada. After starting his first position as a teacher in Parksville, Vancouver Island, his first boss, Dan McKenzie took him aside one day and suggested pursuing a master’s degree, if he would like to consider leadership positions in the future.

This proved a flashpoint for the Canadian and he completed his Master’s in Education Leadership at San Diego State University. After a handful of stints leading schools in British Columbia, he was short-listed to be a principal for the Canadian International School of Hong Kong.

He reminisced: “When I first got to Hong Kong (for the interview), I was tired and I was moody. At first, I wasn’t even sure I still wanted the job. I was thinking of telling the guy who flew me out that I would be headed out on the first flight back. The next day, which was the first of four days of interviews, we got a two hour campus tour.

“As we started walking around the campus, I thought to myself, “I don’t know if everybody here is an actor but no school is this happy.” The children were happy, staffs were happy, even parents wandering around were happy. At first, I thought they were all actors putting on a show for us. But the more time I spent there, the more everything I had learned so far about misery being the key to academic success was questioned.

“That’s when I decided to really go for the job, and after getting the job, I came to realise that more than the IB marks and universities, the number one measurement of success is the smile index.

“Simply put, the smile index means creating a culture where we’re constantly working on understanding and accepting each other, both as students and staff, and letting the children know it is okay to work hard and still have fun. In a place like Hong Kong, it meant letting parents know that it’s okay if your child is happy at school.”

This is the spirit that Dave wants to bring to the ASB when it opens its doors in autumn to an initial batch of 200 students, with a capacity of up to 1,200. As he put it, if he is able to take anyone around the school at any point during the day, and within 15 minutes, ask them for their impression, he has done a good job.

After spending two years as the principal and 10 years as the head of the school, Dave consulted on a number of school and capital building projects in Hong Kong and China.

Dave has also served as Governor and Treasurer of the Association of China and Mongolia International Schools (ACAMIS). He was a contributing writer and member of the Asia Pacific Foundation of Canada and Munk School of Global Affairs Task Force on Asian Competencies and is currently a member of the American Chamber of Commerce in Bahrain. In 2018, Dave was selected as one of Queen’s Universities top 50 influential alumni in 50 years of the faculty of education.

Four years ago, he was approached by a member of the Abushakra family, who run Esol Education. They were interested in having him head up the development of an American curriculum technology-integrated and holistic school in Bahrain.

After some convincing, Dave and his wife Shelley packed their bags for a new adventure and headed for the island.

Dave has spent the last few months travelling the world finding the best teachers, both for academics and extra-curricular activities, while Shelley, who is the admissions manager at ASB, has been busy talking to students and parents.

He added: “We want to have teachers who are energetic and passionate and inspire that in their students. Our music teacher for example – I call him the band builder. When he started teaching in Vietnam, there were five kids at the school that were part of a band. Now there are more than 250, with whom he travels around Vietnam to play. His wife is a physical education teacher who will be joining him. They have worked all over the world. These are the kinds of teachers we will have at ASB – internationally minded global citizens.

“Our principal as well, Steve Bodnar, started off in the US before coming back to Canada to complete his education and then working internationally in Switzerland and Ecuador. We will be working hand-in-hand for the first couple of years as we get the school off the ground.

“We are hoping to instil a culture where even the layout of the classroom changes often and while integrating technology, the focus is on making the curriculum fun and having it drive the classroom and the technology instead of the other way around.

“At the end of the day, based on our conversations with parents, they want their children to live happy lives, and we want to help make that happen, both within school and beyond.”

Scan the QR code for a virtual tour of ASB. 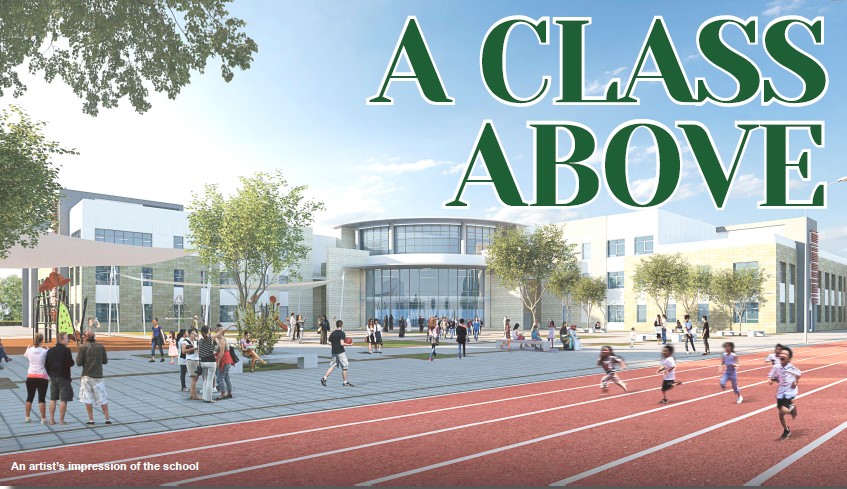