Bahraini singer, song writer Ala Ghawas has joined an array of performers from around the world in the acclaimed One Human music project aimed at spreading the universal message of peace and solidarity, while also raising funds for children in need.

The One Human orchestra features 123 artists from 110 countries, including Ala, who was contacted by the concept’s creator Graham Czach to join the chorus of voices.

“Graham is an American musician and songwriter and he is the chief orchestrator of the project,” said Ala, who is also a musician and producer.

“I was told that my music’s good presence on Apple Music and Spotify as a Bahraini musician made them notice me. My ability to write and sing in English was an advantage too and that’s how and why I got the call and I agreed to do it immediately!

“I was very proud to take part - in fact I’m also very humbled and very honoured.

“The project was sparked by the outbreak of the pandemic in the summer of 2020. What I personally felt from the other participating artists is that there was an urgent need for everyone to get to know one another and offer support.”

The instruments used in the video come from a myriad of cultures including Japanese Taiko drums, Indian sitar and santoor, West African djembe, Latin percussion, Scottish bagpipes, Arabic oud, European hurdy-gurdy and mandolin, as well as all the Western classical instruments including trumpet, trombone, strings and more.

Funds raised by the project’s song and associated fundraising events will support Unicef, also known as the United Nations Children’s Fund, a United Nations agency responsible for providing humanitarian and developmental aid to children worldwide. The agency is among the most widespread and recognisable social welfare organisations in the world, with a presence in 192 countries and territories.

“Unicef has supported and commissioned the project and they have applied for it to be part of Guinness World Records as the largest collaborative musical project ever made,” added Ala. “I think it’s an unbelievable piece and I’m so thankful that I got to be part of it.”

The international initiative, that seeks to foster global unity through music, was conceptualised and composed by Graham who first brought the collaborative creation to reality on July 16 in honour of the UN Nelson Mandela International Day celebrations.

The sound and feeling achieved with the building of the arrangement, instruments and voices throughout the song was ‘truly magical’, according to music critics.

“There was a clear passion and desire for dialogue with people whom we share life on planet Earth yet we differ from them in most of the details of life. This may be the most essential positive takeaway that we inherited from the coronavirus disaster,” Ala added.

Ala, who has been active in the Bahraini music scene since 2007, has participated in several music festivals in the kingdom, Dubai, Kuwait and Cairo.

He has released eight albums so far in English and his ninth is scheduled to come out on November 24. It’s called Brouvat Mout and it would be his first in Arabic. The first single from the album was released on July 30 entitled I’ll Praise You When You Die. 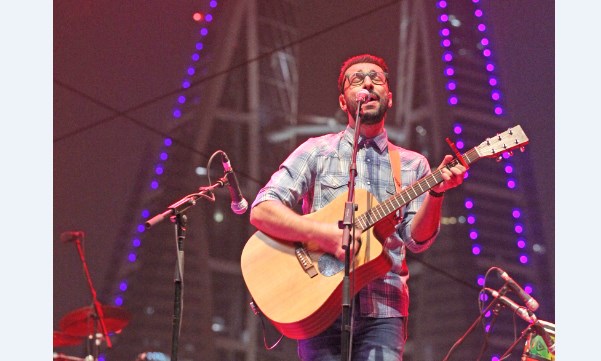