METALHEAD Ashwin Shenoy has stirred heavy rock infuences into a metallic mixture featuring Indian and Arabic sounds to strum his way through the frst of four years at one of the most prestigious music colleges in the world ... and won praise from his tutors.

After securing a place at Berklee College of Music, the former St Christopher’s School pupil is determined to make a name for himself in the music industry.

To date 99 Berklee alumni have gone on to secure 229 Grammy Awards, the musical equivalent to the movie world’s Oscars, and Ashwin hopes to follow in their footsteps after graduating. Ashwin, from Zinj, said: “I wasn’t expecting to get accepted to Berklee … I was totally shocked but it’s turning into an amazing experience.”

The 19-year-old only started learning how to play the classical guitar at the age of 13. Two years later he decided to follow in the footsteps of his idol Fredrik Thordendal, a Swedish lead-guitarist of the metal band Meshuggah, and took up the electric guitar and decided to infuse his love for classical Indian and Arabian sounds into his compositions.

“My principle instrument is the electric guitar. I hope to dual major in music production and music performance,” he explained.

“I grew up listening to a lot of heavy music. I was young and I wanted to express my energy and excitement the way my favourite metal bands, like Meshuggah, did.

“However, over time, my father, Madhukar, introduced me to a lot of Middle Eastern and Indian music. Now my favourite musicians range from metal guitar players like Thordendal to the Hindustani Classical tabla player from India, Ustaad Zakir Hussain.

“It is defnitely a life-changing experience for me to have been accepted. I never thought I would excel in music in such a way, in such a short space of time compared to other musicians over here who have been playing longer.

“The greatest thing about this experience is that I wasn’t always known as the musical one in my family, not until recently when my musical strengths started to develop and become more a part of me. Music made me who I am today.”

Ashwin has picked up a number of different instruments over the years including drums, guitar and oud. While growing up he explained how he wanted to emulate his favourite bands as much as possible as well as imitate their singing style, so he would learn the songs on the drums as well as the guitar. Over time, he decided to fne-tune his vocals professionally at the Saar Music Institute and adding that to his repertoire.

He believes he has inherited his music abilities from dad Madhukar because, as a child, Ashwin and his 15-year-old brother Abhinav, a saxophone player, would hear him play the Indian tablas and the keyboard.

His proud mother, Malini, is also very creative as a part-time artist and has greatly infuenced his imaginative side, especially when it comes to writing music.

Madhukar, a partner at Big 4 Global accounting frm, is currently funding his son’s studies in Boston. The annual fee of $62,000 excludes travel costs and incidental expenses.

Ashwin hopes that his newfound exposure will reduce the burden of the tuition cost on his parents and help secure sponsorship.

Ashwin has lived in Bahrain for 19 years; therefore moving to Boston for university was a nerve-wracking experience but an enjoyable one.

He said: “I want to learn as much as I can. I have recently started learning the oud from Saad Jawad and I also hope to learn the classical Indian instrument veena from my grandfather Suparna, so that I can bring more traditional infuences into my music.

“I compose a lot of my own music in my free time. I try to create music in various styles and fuse different elements together. I love bringing in eastern infuences into my western music.”

Ashwin has recently earned a placement on the Dean’s List at Berklee College of Music. To be eligible for this honour, a full-time student must achieve a GPA of 3.4 or above. He has been praised by many of his teachers, including Associate Professor Sal DiFusco.

“Ashwin has been an absolute pleasure to work with during his frst two semesters here at the college,” said Mr DiFusco. “He is a very hard worker with a passion and determination to grow as much as possible in his musical abilities.

“He is always prepared, very disciplined and extremely eager for knowledge.

“I was also amazed when, during his break between semesters, he opted to write and record a CD while most students were resting and recuperating. I know that Ashwin will be a major asset to the college and also move on to do incredible things in the music industry. Look out for this young, talented and determined musical force in the future.”

Ashwin hopes that he can start a band in the future. “I have no idea what the future holds for me,” he said. “If an opportunity to stay in Bahrain when I graduate comes up, I would gladly take it because it’s my home. As of now, I am focusing on composing my own music as I prefer to express my own ideas to an audience.

“I hope that this degree will not only make me a better musician but also give me a better understanding of the industry as well as open up more opportunities once I graduate.”

*If you would like to sponsor Ashwin on his musical journey, email ashwin. [email protected]. com

Racing ahead of the competition 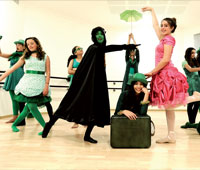 Students get in tune for top music festival