ARCH-RIVALS Venus and Arsenal Ladies kicked off the 11th season of the GulfWeekly Ladies League with an intense opening fixture at Soccer City Stadium in Hamala.

Although it was a close encounter, season nine’s champions Venus were victorious against last season’s triple-title winners Arsenal, 3-2.

Arsenal admitted they had expected a tough opener and were missing a number of squad members through injury, including last year’s Player of the Season Sam Rule, and others who have left the country for work and study reasons.

Arsenal’s captain Rama Salem, 28, a graphic designer from Riffa Views, said: “We classify Venus as our main competitors and it’s always a great match whenever we play each other.

“For our first game of the season, though, it was an unfortunate result. The game was very close but we appeared to lack an attacking edge having lost many key players. Having said that, we kept our heads up and tried to clinch back a few goals, but Venus got the better of us.”

The return of an ace striker to their rivals provided an added a twist to the affair. Venus’s own former Player of the Season Zain Al Khalifa, who happened to miss the whole of last season, signalled her return with a seventh-minute goal.

However, that strike was shortlived when Arsenal’s Eleni Tsappis conjured up an equaliser before half-time.

After the break Venus continued to have the bulk of possession, although the Arsenal Ladies created a string of chances on the counter-attack but were unable to capitalise on them.

Venus’s Tala Al Bashimi and Al Khalifa’s prolific partnership and clever inter-play up front secured a 3-1 lead. The Arsenal Ladies refused to give in easily, though, and continued to create chances for themselves with unlucky Alaa Alawi hitting the post in one goalmouth scramble and the team failing to capitalise on a dropped ball from the Venus ’keeper which should have been a simple tap in.

The pressure finally paid off when Arsenal’s Eleni burst through and notched a second goal but it wasn’t enough to secure a share of the points.

Salem believes Venus’s tough tackling and tactics were the difference between the sides on the day. She said: “We had difficulties in the first few minutes of the first half, but after Eleni’s equalising goal it helped boost our confidence and keep up the pressure. All-in-all it was a solid performance from our opponents who adopted a ‘man-on-man’ defensive style, which made it harder for us to get into the right positions for the ball.

“It forced us to play deeper than we usually do as we have a natural attacking style to our game, and with key players missing it proved too difficult to get the extra goals we needed. But well done to both sides for producing such an exciting game.

“And, although we have lost a few players this term due to other commitments, our solidarity has never been stronger. We are all in this together with one goal in mind, to lift the cup together again and, more importantly, have fun!”

Team Venus have always proved to be strong contenders since joining the Ladies League in 2012 after a group of Bahraini girls fell in love with the game and began to take football more seriously.

The team, inspired by the Roman goddess of love and beauty, was formed from friends enjoying a fun weekly game. They have turned into a full-fledged football club attracting more than 30 girls keen to compete for glory and eager to clinch back the coveted GulfWeekly Championship Trophy.

Venus’s midfielder, captain and co-ordinator Esra Ahmed Nuruddin, 28, from Riffa Views, said: “We are very happy about the opening victory and are looking forward to winning more games this season.

“We have some impressive new recruits and the team continues to grow which I’m very happy about. It’s great to see all these girls come together and work together as a team. It reminds me of why I started this to begin with - women coming together playing a sport, working on their fitness and health. I am so proud of our girls. Best luck to all the teams and I believe this will be a great season.”

As the big guns faced each other, RCSI also took on Seef Dental, regarded by fans as the ‘nearly’ team who always prove difficult to beat.

Seef Dental have been busy strengthening the squad over the break and the RCSI team are also moving in the right direction under the guidance of Alana McConologue.

The RCSI girls took the lead with a fortunate 16th-minute own goal but could only hold onto the lead for three minutes before Seef equalised through Fatima Al Areen.

The second half was an exciting affair but amazingly goalless with Seef continuing to threaten in attack against a solid and well-marshalled RCSI defence. The game ended 1-1.

“This is going to be a long season, running until May, with six sides all playing for the league trophy. We are really happy that Joga is returning to the league alongside Arsenal Ladies, Venus, Arsenal U21s, Seef Dental and RCSI.

“Ladies football has come a long way in four years and we hope that this league has helped them to develop. Four of our Arsenal U21s have graduated to the full national team and it’s great to see so many women of all ages playing the game and enjoying it.”

Tonight, the league continues with Joga facing Arsenal Ladies who are looking to bounce back from their opening day defeat. The Arsenal U21s will open their season with a game against RCSI. 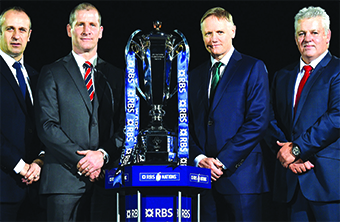 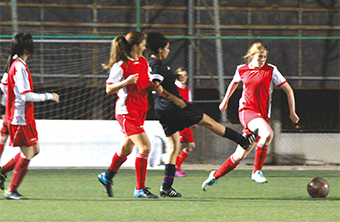 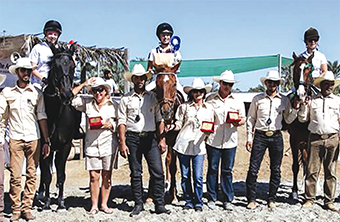 Too Hot To Trot