While the lives of those in the Bahraini security forces are constantly being highlighted by incidents around the kingdom, an American author has released an anthology focussing on a fictional policeman who is devoted to fighting crime and preventing unrest.

Josh Pachter wrote a series of short stories of mystery and intrigue starring Pakistani policeman Mahboob Chaudri, a patrolman who works his way up the ranks to detective, and all 10 have just been released in a volume titled The Tree of Life.

The American, who was born in New York but currently resides in Virginia with his wife Laurie, a writer and editor for a US government agency in Washington DC, and dog Tessa, visited the kingdom during a period of extensive country-hopping in 1982.

He said: “After I earned my Bachelor’s and Master’s degrees from the University of Michigan and taught at a college in Pennsylvania for a while, I spent more than a decade teaching on American Army, Navy and Air Force bases across Europe and the Middle East for the University of Maryland.

“Amongst stints in England, Holland, Germany, Greece, Italy, Spain and Kuwait, I was sent to Bahrain for what was supposed to be four months but wound up being 10 months.

“At that time, the Bahrain School had a dormitory for boarding students that so happened to be empty at the time. I was given the use of the dorm advisor’s room, and after a while I moved off the school grounds and into a lovely apartment in Manama.”

It was during this stay that Josh, who had already established himself as a keen and talented writer after having his first short story published in Ellery Queen’s Mystery Magazine at the age of 16 in 1968, formulated the character of Mahboob, who serves in the fictitious Bahrain Public Security Force, and his exciting adventures.

He explained: “I think what originally inspired me to begin writing the Chaudri stories was Bahrain itself. Although I’d done a lot of travelling in the US and Europe, this was my first time in the Middle East, and Bahrain was so completely foreign to me that I saw story ideas pretty much everywhere I looked.

“I went to the souq and saw that I could write a story about a robbery in a money exchange office. I visited the National Museum and saw the famous Dilmun seals, and it seemed obvious that a story could be written about someone stealing one of them. I spent a lot of time at the US Navy base, and realised it made sense to write a story about something being smuggled off the base. Pretty much everywhere I visited provided a setting for a story.”

The Chaudri stories are centred on crimes including theft, kidnapping and even murder, but Josh deliberately excluded graphic violence and firmly categorises them as ‘soft-boiled’, and says that his fables will appeal to children as well as adults.

Josh, who is father to county attorney Rebecca, wrote four of the stories during his stay in Bahrain, and completed the 10th in 1991. However, they were reprinted in various magazines and anthologies over the years and a collective volume appeared highly unlikely until a stroke of fate this year.

“In November Simon & Schuster will be publishing Styx, a zombie cop novel I co-wrote with Belgian author Bavo Dhooge, and when word of that got out publisher John Betancourt of Wildside Press asked me if I’d be interested in letting him do a collection of my short stories. I thought the Chaudri tales would be a perfect fit, and thus The Tree of Life was born.”

The sudden rejuvenation of interest in Mahboob’s crime-busting exploits has even persuaded Josh to consider writing more stories. Two of the works included in the collection, ASU and The Ivory Beast, were originally conceived as part of a trilogy, with the third part Home Leave, unwritten … until now, while Josh is desperate to write a story featuring the Al Areen Wildlife Reserve, the one setting he never got a chance to include.

The workaholic writer certainly shows no sign of slowing down, either. When Josh isn’t working as the assistant dean for communication studies and theatre at Northern Virginia Community College’s Loudoun Campus, he’s still scribbling away.

Coffee Date, a story co-written with Laurie, will be published in The Saturday Evening Post in October, and two more self-written tales, Selfie and Eb and Flo, are coming up in EQMM and Sherlock Holmes Mystery Magazine. This doesn’t include the other works still being written, editing work, and his passion of translating fiction and nonfiction from Dutch and Flemish into English.

In total, he has had four dozen stories printed in magazines and anthologies published in the US and around the world, and many are frequently reprinted in various year’s-best collections, other multiple-author volumes and textbooks.

However, he would jump at the chance to add to his hefty schedule and take a trip to the seat of inspiration and return to the birthplace of his most proud creation.

He said: “I absolutely loved my time in Bahrain. I was treated extremely well, such as being invited often to the American embassy to listen to the ambassador play jazz piano, interviewed by a national newspaper and radio station, asked to speak at the British Council, given a front row table at a Tina Turner concert by a student to whom I’d offered extra help outside the classroom, and welcomed into many Bahraini and expat homes.

“Since I left in 1983, I’ve never yet returned, but I would love to come back. I’d be delighted to read from and sign my book, do a series of lectures, teach a course, you name it! I’d dearly love a return to the beautiful island.”

*The Tree of Life is available in paperback for $15 and (titled The Mahboob Chaudri Mystery Megapack) as an eBook for $1, both from Amazon.com and other online vendors.

The Dilmun Exchange – Mahboob, who like some members of the Public Security Force originates from Pakistan, enters an exchange office in the souq to send money home to his family, and the office is robbed while he’s there.

The Qatar Causeway – A Dutch policeman is visiting and Mahboob takes him to visit the construction company which is building a causeway from Bahrain to Qatar. They investigate industrial sabotage.

ASU – Someone is stealing beverages off the American Navy base and selling it on locally, and Mahboob is sent to stop the smuggling.

The Sword of God – During an American senator’s visit to Bahrain, a doctor and two nurses from a hospital are taken hostage while sightseeing. 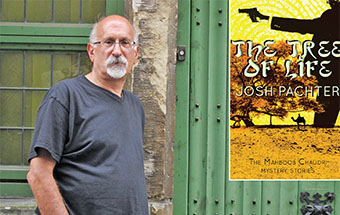