Bahraini songstress Banah Anabtawi is making waves in the region after uploading her first video to YouTube, and hopes her success will inspire young girls in the kingdom to follow their musical dreams and have the confidence to one day step out under the spotlight.

Best known by her first and stage name Banah, the jazz-fusion soulful singer, who has performed numerous gigs around Bahrain, uploaded Bang Bang to the video-sharing platform on Christmas Eve and has already seen it rack up almost 20,000 views.

The 32-year-old Bahraini was born in Canada before moving to the Eastern Province of Saudi Arabia when she was four. After returning to Canada to study business at university, she finally settled in Bahrain 12 years ago.

She had a passion for performing at a young age, but struggled to pursue her hobby under family pressures and being shoehorned down a path she didn’t wish to follow.

Banah explained: “Since I can remember, it was always a struggle to actually do music. When I was younger, I wanted to study it in the US and I applied with the intention of going. My family at the time objected and felt that studying business would be a better alternative. Unfortunately, the stereotype of a performing artist was the topic I couldn’t avoid when discussing the music industry with my family.

“They were under the impression that being an artist entails doing something you shouldn’t do, and that music in general was not a righteous path for a female Arab.

“When I was in Canada, I entered the popular TV talent show Canadian Idol and was one of the 100 contestants shortlisted out of 3,000 participants in my district. But I was not allowed to fly to Toronto and I had to give up on that dream and accept my reality.

“Eventually, I began to give up on music.”

She however, found love and an ‘amazing’ supportive partner, Hatim, who she credits for being her ‘ultimate rock.’ They are now married and have two beautiful daughters, Alya, four, and Hana, two.

“Nevertheless, when I turned 30, I realised how unfulfilled I felt,” Banah admitted. “No matter where I worked, something was always missing and I eventually became depressed about it before I realised that music was still possible to pursue.

“I began to break out of the category of ‘mother with kids whose sole duty is to look after the family’ and started to transform into a woman with purpose, passion and ultimately a dream.”

Two years ago she decided to seriously pursue music. “I remember writing a 10-page plan entailing what I needed to do to reach my goals,” she added.

It was only in January 2017 that Banah began to sing in public places in Bahrain, usually small lounges that catered for jazz. At first, she found herself under scrutiny as it was unusual to encounter an Arab woman performing, but she found the community to be supportive.

Her star soon began to rise, and her popularity continued to snowball throughout the year.

Banah was invited by the Spring of Culture organisers to be the opening act of their main event, legendary Welsh singer Tom Jones, in April. Several months afterwards, she was one of the lead vocalists and performers for the International Youth Conference Operette, and then in October performed at the popular Bahrain Jazz Festival, the Bahrain International Music Festival and the Building Bridges Film Festival, before a sensational performance at The Nest in November.

She explained: “My confidence began to grow and I started to develop a following which I would have never imagined happening a few years back. I was ecstatic at getting so many gigs so quickly!”

Banah’s enduring popularity led her to create her first official music video for her song Bang Bang. It is a jazzy cover of the Nancy Sinatra classic and was recorded during a live music session with a full backing band behind her, whose members chop and change frequently as she enjoys working with different musicians within her favoured jazz/soul fusion genre.

The song has taken YouTube by storm, attracting thousands of views from across the Gulf region and beyond.

Her plan is to upload more videos to her channel in the near future and will soon be filming a video for Bahrain Sessions, a showcase of Bahrain’s music and poetry.

Furthermore, she is working on an album in Beirut, Lebanon, with a tentative release date of June. This collection will explore old Arabic classics and modernise them with a twist of jazz, fusion and soul. Similarly, she will cover English songs and make them a little more oriental to generate a tale of the West meeting the East.

Banah’s love for music, and in particular her affinity for jazz, started when she was a little girl. She explained: “For the longest time, my dream was to become a Broadway performer as I loved to sing and act!

“At the same time, I also enjoyed Arabic music. When I was seven, I used to listen to Umm Kulthum and Fairouz which was very uncommon for a child, but it gave me some kind of serenity and peace.

“When I was in my early teens, I had an obsession with American singer Mariah Carey and know every song of every album word-for-word. My aim in life was to be able to hit her scream, or very high pitch note, which I eventually did!

“In university, I began to explore a new genre of music - classic rock - as well as soul & blues.

“My taste in the past couple of years has evolved into indie/soul/jazz and a bigger focus on Arabic music in general.

“Because I enjoy both English and Arabic music, there are many artists that I look up to for inspiration such as Aretha Franklin, Ella Fitzgerald, Amy Winehouse and Lady Gaga. As for Arabic performers, I love Fairouz, Julia Boutros and Lena Chamamyan.

“My music and style have been significantly inspired by the influence of the various cultures I was exposed to. Growing up in both the Middle East and Canada has allowed me to take in elements from each chapter of my life, and enabled me to reflect this in what I sing and how I interpret music.

“This versatility has also allowed me to sing both Arabic and English as well several genres rather than just one specific style.

“I take the best of both worlds: soul and jazz from the West, and tarab from oriental music. My style today is fusion jazz which I hope to take further in the Arab World as well as internationally.

“Jazz is one of the richest and most diverse blends of music as it has this amazing ability to speak directly to the hearts and ears of a listener, unlike any other style, in my opinion.”

Banah believes that opportunity is out there for young singers, particularly girls, and hopes that they follow their dreams of stardom much earlier than she herself did.

She said: “The best advice I can give anyone is to follow your inner voice.

“There will always be that inner voice inside of you that has all the answers you are looking for, even if you might think you are too young.

“You can choose to brush it off and replace it with the voices of others, but at the end of the day those voices are not yours, and you will eventually stop listening to them because your own inner voice will make its way to you once again.

“I would also advise you to surround yourselves by like-minded people that believe in your talent and passion, and it is sometimes perfectly fine not to listen to others who think they know what’s good for you. Yes, they love you and care about you, but they cannot control your path and life.

“Music is not the easiest industry and it has its own share of struggles, and struggling makes it that much more worth it.

“Work hard, craft your talent and don’t be over confident. Try and get lessons, whether vocal or performance, and get better at mastering your skill. Perform at every opportunity you can, and if you can’t, then make videos and share them with others.

“Lastly, take criticism … but don’t take all of it to heart. Again, everyone will always have an opinion, so you need to be strong and believe in yourself and follow that voice inside. It’s always there - you just have to keep searching for it.”

To watch her official video for Bang Bang, click the link below: 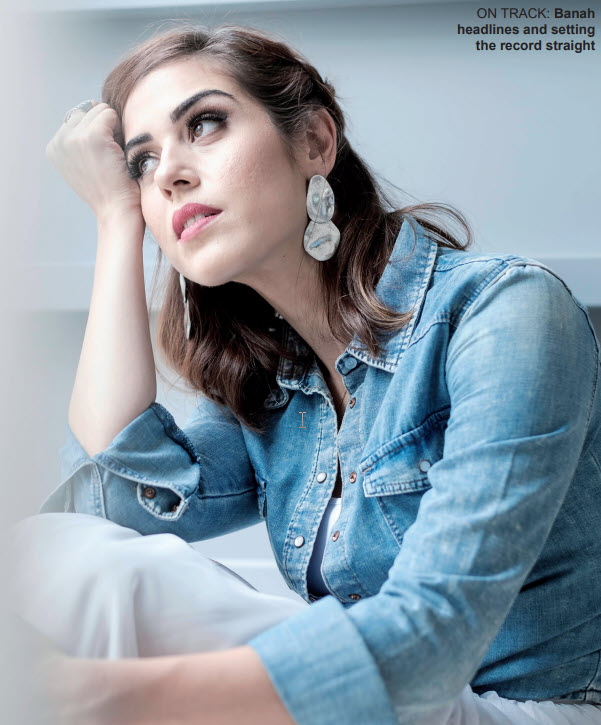