Bestselling author Monisha K Gumber is preparing for the launch of her next young adult sensation, fresh on the heels of scooping a prestigious award and breaking through the 100,000 followers milestone on Facebook.

The Indian national, who has lived in Bahrain for 13 years, has just released her third novel, Bahir, which is available now for BD5 in Jashanmal stores around the kingdom.

Bahir is about an immigrant Pakistani woman, 17-year-old Sawera, who is raised in the Middle East. The story follows her trials and tribulations as she lurches from love to heartbreak and deals with numerous tragedies that befall her.

The book contains a noticeably darker tone than Monisha’s previous efforts, Sick of Being Healthy and Dying to Live, a move which Monisha hopes will strike a chord with her burgeoning fan base.

She said: “My first two books were primarily written to address teen problems in a simple, heartfelt style. You could say I was trying to hone my skills as a writer and it was a natural progression to move towards stories that could appeal to the older readers as well.

“This time I have attempted a novel that is based on some true incidents and has a dark side to it. However, being the person I am, I tend to see humour and positivity in everything. That led to the development of a light undertone that provides relief from some of the more mature themes.

“I felt that my readership was growing when a lot of mothers of teens started connecting with me as they felt the books that dealt with body image and self-esteem were relevant to women of all ages. Hopefully with Bahir this positive message will continue to grow.”

The teenage girl demographic has flocked to Monisha’s work over the past couple of years, with her online following hitting the 100,000 mark at the beginning of the year.

Unlike many authors, she regularly responds to messages on her page and discusses plot points and themes with her readers. It is perhaps this community engagement, plus her gripping yarns, which saw her awarded ‘Best Author of the Year’ from India’s fastest growing youth portal after an online popular vote.

The 41-year-old lives in Bahrain with her husband Manish, a management consultant, and their daughter Anusha, 15, and son, Siddhi, nine. She spent the early part of her life travelling from one corner of India to another as the daughter of a retired army officer, before obtaining a Master’s degree in Business Administration and forging a career in marketing and HR.

However, she gradually gave up on that to pursue her passion of writing, which started as a means to tell stories to her daughter. Her nomadic upbringing was a major inspiration for the plot of Bahir, which sees the globetrotting Sawera visit Pakistan, Saudi Arabia and Bahrain.

Monisha explained: “Pakistan was a part of India before the unfortunate historical event called ‘Partition’ that separated us in 1947. My parents and in-laws were born in Pakistan and north Indians, particularly Punjabis, share common roots with them. Being in Bahrain, I also have a few friends from Pakistan with whom I have had some enlightening discussions about the culture, politics and various similarities. So I did not have to do any formal research, as such, as this culture was all part of my background.

“Having said that, the story is not about these countries and could take place anywhere. Even the central character could be from any place and still the outcome would be the same. Being a proud Indian, I believe in the concept of ‘One World’ and would like to emphasise the fact that I may have taken some liberties in describing some places and incidents but my intentions have never been to judge any community or country for that matter.

“I tried my hardest to make the tale universal and I hope young girls will take inspiration from it. Sawera goes through hell to secure a good life for her abandoned children and has to deal with enormous troubles to make things work. There is not a dull moment and despite her sorrows and difficulties, she remains an eternal optimist to the extent of being extremely vulnerable and naive.

“The character has shades of grey like almost everyone, as I don’t believe in having an unreal-istically ‘pure’ character. She is a little too ambitious for her own good and uses her sensuality and good looks to her advantage.

“Ultimately, I always wanted to write about human motivations and struggles; like why and how people, particularly women from humble backgrounds, leave their homes in search of a better future for their children. How do they deal with the guilt, the pressures and difficult circumstances, away from their own countries?

“These are complex issues that I again wanted to address in a believable, relatable story for-mat. You will see such women everywhere - it could be your Sri Lankan housemaid, the Filipina sales girl you see in the mall, the Thai beautician … you name it.”

Monisha’s career as a writer only developed recently, and by her own admission, she resisted the temptation to devote herself full-time to it despite her husband’s pleas. She explained: “My first book was started reluctantly and rather casually as I did not have the confidence in pulling it off.

“I started it in my mid-30s, gave it up and then went back to it three years ago. Furthermore, like most writers, I went through numerous confidence-sapping rejections from publishers until Leadstart Publishing took a chance on me.

“After that, I started enjoying it and, although there was no particular ‘Aha!’ moment, the fact that my first book was so well-received gave me a huge confidence boost and I’m fully embracing myself as a writer.”

Monisha shows no sign of slowing down, either, with numerous projects in the works including illustrating an anthology-style high-level colouring book for teens with a renowned documentary filmmaker, who will be doing the stories which focus on various sensitive subjects such as self-esteem, abusive relationships and online bullying.

Bahir is available now from Jashanmal stores, with a retail price of BD5. It can also be purchased online at Amazon. 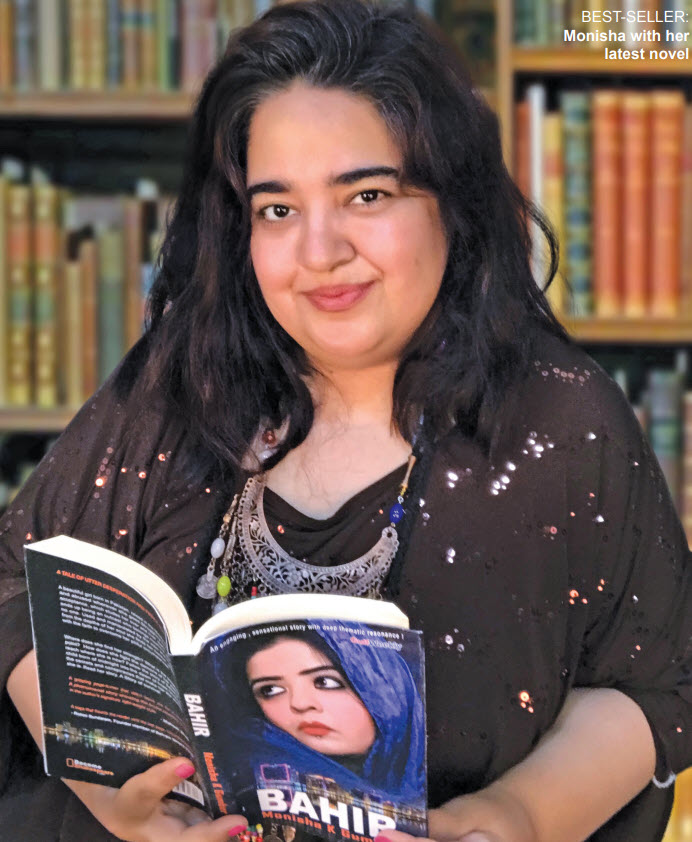