Flags flying for the future

TWO bright and breezy bots, a step back in history and a fast forward into the future were all on the cards at the Third Middle East and Africa FinTech Forum held under the patronage of the Central Bank of Bahrain.

Discussions dealt with the financial industry’s key issues such as financial inclusion, open banking, artificial intelligence (AI) and the impact of fast-developing technology on banking and society in general.

It all started with an invitation-only cocktail reception and dinner at the Ritz-Carlton, Bahrain’s Al Ghazal Ballroom last Wednesday evening to mark its opening and innovation exhibition.

The guest speaker was Dr Linda Yueh, the BBC’s former chief business correspondent and colleague of the excitable, bouncy and very loud Aussie host of proceedings, Aaron Heslehurst, who was brought in to moderate the event in his inimitable style, despite admitting to having ‘no volume control’.

ABC’s Group CEO Dr Khaled Kawan told the diners how the forum was just part of a series of events during a ‘FinTastic Week’ of Bahrain Economic Development Board  initiatives which demonstrated how much this country was ‘a leader in this area’ and the ‘best country to launch, grow and invest in FinTech business’.

“Staying put is not a solution, not an option at a turning point of the industry,” he said.

“We need to move. The first step has been exploratory. Three years on, the journey is much more rewarding than the destination, if there is one?”

The FinTech path has led to the bank getting set to launch a fully digital and mobile bank called Ila with no branches which, in addition to regular staff, will feature ‘digital employees’.

“We are so enjoying the journey,” he added, “when you see the type of talent the new bank has attracted and the different set of skills.”

He admitted to recruiting people who, perhaps five years ago, would not have been offered posts in its traditional bank, but today were the ‘epitome’ of the new venture, including a blogger in her 20s who boasts 20,000 followers.

He enthused over the young recruits’ enthusiasm and intelligence describing them as ‘a new breed, a new generation of bankers we are proud to be associated with’.

It’s not before time. The Millennial Disruption Index reported that 71 per cent of people who reached adulthood in the early 21st Century would rather go to the dentist than listen to what banks have to say.

Following that fact, the audience was given its first journey in a time machine. At the beginning of the 16th Century, Leonardo da Vinci and Michelangelo were hired to paint vast battle scenes in direct competition with one another.

Leonardo was in his early 50s and renowned throughout Europe and was commissioned to paint a vast wall painting of The Battle of Anghiari, a scene from the 15th Century wars between Florence and Milan. Then, a far younger Florentine was commissioned to paint The Battle of Cascina, which took place between Florence and Pisa in the 14th Century, on the same wall of the Council Hall.

Michelangelo was just 29, and a prodigy. Leonardo depicted the very heart of battle, an agonising, horrific entanglement of human and animal bodies. Michelangelo, however, drew war’s margins, a moment of bizarre ordinariness, when Florentine soldiers, bathing in the Arno, hear the enemy coming and rush to get out of the water and put on armour.

“Michelangelo has been fiercely competitive and he had to outdo the master, so the context became very quickly not a contest of skills –because both in fact had skills beyond any comparison – it turned out to be a contest of imagination and originality,” said Khaled. “The FinTech business is no different.”

He took a step forward six centuries and highlighted the fact that a Harvard dropout called Mark Zuckerberg, in his 20s, pulled the rugs from under the feet on the giants of the time, by helping to found Facebook.

Outside the main conference hall, an exhibition hosted a range of stalls from Bank ABC, Arab Financial Services (AFS) and guests such as MasterCard, Backbase and the CBB. These stalls showcased innovative financial technology products, giving visitors the opportunity to see the latest in wearable payment tech, mobile applications and other developments.

Dr Linda took a step back in time too, and quoted the late economist Joseph Schumpeter, who died in 1950, and suggested innovation is ‘a feat not of intellect but of will, a special case of the social phenomenon of leadership’.

FinTech might be the revolutionary technology that is going to raise our growth rates, prevent a slow growth future and bring two more billion more people into the middle class and generate prosperity for us all … but it might not, she added.

“It’s really difficult to predict but technological change is within our control,” she added, using two quotes to illustrate her point. First came one from Microsoft founder Bill Gates in 1981. He said 460k of computer memory ought to be enough for anybody … and a couple of years later he also predicted there would be ‘no spam’ in the future.

One of the most exciting parts of the exhibition was the public debut of ‘Fatema’, the region’s first-ever emotionally-intelligent ‘digital employee’.

She is capable of engaging in natural conversation with customers, measuring emotions and expressing emotions of her own in return, although Fatema struggled with the loud buzz of the conference-goers in the background on the two occasions FinTech Focus put her to the test.

Her human aid, Bank ABC’s Alaa Qasim, was bright, engaging and a fine example of the enthusiastic young guns and the confident public face of the future enterprise.

Visitors to the exhibition were invited to chat with Fatema and ask her questions on specific products and services. In future, when she is more widely available online, she will probably work better.

The star turn on stage at the forum was undoubtedly Sophia, a robot powered by AI who interacted amusingly with MC Aaron and was programmed to say how happy ‘she’ was to be in Bahrain.

Sael Al Waary, chairman of AFS and deputy group CEO of Bank ABC, told the audience of banking executives, including numerous central bank governors, and regulators that the pace of change in financial services was increasing rapidly and called on them to be prepared for the future.

He started his speech by relating the story of the Ideal X, which was the world’s first cargo ship. This was, he said, an apt metaphor for the potential of FinTech to change the lives of people around the world. Containerised shipping, he noted, had completely disrupted global trade when it first appeared. FinTech had the potential to do the same for financial services, and he suggested this would be a positive change as long as a few conditions were met.

Positive disruption, in his view, would involve changing people’s habits for the better, reinventing how people use services, giving customers control of their banking experience, lowering costs for customers and increasing access amongst a wider portion of the population.

Predicting the future is a funny old game. Will Fatema and Sophia be the future of banking, alongside an AI Imran and Stan? The jury is out but no-one can suggest Bahrain is anything but forward-thinking.

The forum has grown from its first year when it attracted less than 250 delegates with speakers from the region. This year’s event pulled in 600 confirmed attendees and attracted international names on to the podium.

FinTech Focus confidently predicts even more will show up for the fourth edition next year. 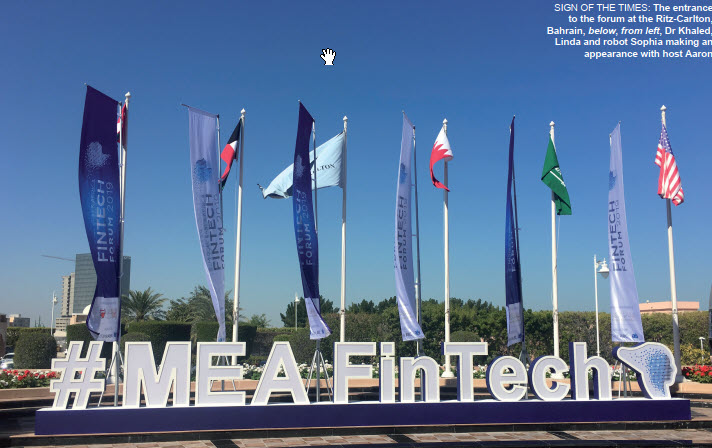 Flags flying for the future