Cruising along in a crossover

Being an expat non-Muslim during Ramadan presents some challenges. Waiting to eat until dusk, for example, or conducting a gruelling workout but not being able to sip water until you’re back in your own home.

But it has its delights too. The month-long community spirit of giving, charity endeavours and plethora of iftars and ghabgas are frequent cause for celebration.

So too is one facet of daily life that often slips under the radar … the lack of traffic during the daily commute and the vast number of parking spaces near GulfWeekly’s Exhibitions Avenue HQ now that the local hotels have closed for the season.

There’s no better time, then, to take out a new, super-stylish Mazda CX-9 for a test drive and really put it through its paces on the open roads. What a difference it makes to the experience when you can open the throttle and put the steering through its paces as opposed to sidling from one traffic jam to the next.

What a joy it was to roar along with the 2.5L Turbo engine with SkyActiv Technology engine purring with pleasure. Generating 227bhp, the CX-9 is no slouch. It accelerates with gusto, quickly launching you from a stop or tendering extra oomph when merging on to the highway. Additionally, you can carry a full load in the CX-9 without noticing a discernible slow down.

The 2019 CX-9’s exterior is beautifully designed and really looks the part, with a long bonnet, a steeply raked windshield and a sweeping rear end. Inside is an equally lovely cabin, dressed in quality materials and high-tech features.

I’d be lying if I told you all this goodness came without compromises: cargo capacity and third-row passenger space could indeed be more generous. However, these compromises are small and in no way diminish how the car drives.

In my experience, three-row crossovers are great for hauling families and cargo, but they aren’t always pleasing to drive. The CX-9 is a rare example of a crossover that still blends a great deal of driving fun with all the utility thanks to a well-sorted chassis and communicative steering.

Surprisingly light on its feet, it often feels as if you’re driving a smaller SUV. The suspension is firm, but it’s still supple enough riding over rough stretches of road and the kingdom’s numerous potholes and speed bumps. The firm suspension and accurate steering culminate in superior cornering control.

As far as infotainment features go, Apple CarPlay and Android Auto capability have finally join the spec sheet, which is most welcome. The Japanese marque has also included a list of optional features for 2019, including ventilated front seats, a 360-degree-view exterior camera system, SiriusXM Travel Link (live traffic and weather updates, among other things), a digital gauge display, power-folding exterior mirrors, and a frameless rear-view mirror.

From my experience, the navigation worked perfectly and unlike some models, hooking my phone up to the centre console in order to play music was completely seamless. It took me less than 10 seconds to do so which is an exceptional benchmark compared to other brands which can be unnecessarily fiddly and overcomplicated.

Speaking of music, the sound quality was absolutely superb with a premium Bose system, complete with 12 high-performance speakers and AudioPilot, Centerpoint and SurroundStage technologies. Driving to marvellous melodies and positive vibes turns a good test drive into a great one.

For a beautiful crossover vehicle that drives really nicely and packs in a raft of features, you can’t look much further than the new Mazda CX-9 this Ramadan.

Until the end of the month, the vehicle has a starting price of BD11,400 inclusive of VAT. 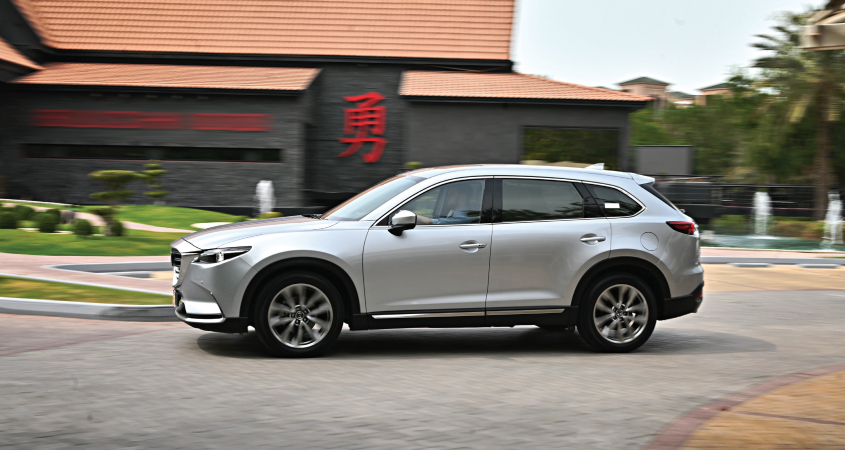 Cruising along in a crossover

Enjoy the best deals on wheels