AN OASIS OF PEACE

INSPIRED Lena Dajani and Rula Al-Chorbachi have combined their passion for art, architecture and design to help young sufferers of psychiatric disorders and mental health issues find calming reassurance as they are treated for their conditions.

For many years they are used their talents to brighten up public spaces with vibrant installations and recently took on the challenge to work on a special project in the grounds of Bahrain’s Psychiatric Hospital, Child & Adolescent Unit.

“The garden of the hospital was thin and narrow and runs along a major road. It had no sense of calm or serenity,” Lena explained. “Therefore, the concept was to try to address these conditions by turning the area into a peaceful walled garden following the local tradition of courtyards.”

Lena and Rula are co-directors of Art Reach, a non-profit group supported by a dozen dedicated artists and designers, who volunteer their time to produce art fittings and fixtures across the kingdom.

The success of the latest project could result in more hospital art projects being instigated with the main hospital of Salmaniya now in the group’s sights to bring positive vibes to patients and visitors.

The group also has a network of high school and university students who offer support, as well as community members willing to lend a hand in making their country or place of residence a more vibrant place to live in.

Lena, a Palestinian-American artist who has a background in project management and acts as programme director of the group, started working on revamping the unit’s garden more than two years ago with the assistance of volunteers.

The hospital is considered the main centre for psychiatric care in the country offering services to everyone suffering from mental health illnesses. It’s been working for 83 years to fulfil its sole mission of increasing awareness of mental disability and promoting mental well-being.

These projects are partly created through free workshops at their studio in Harbour Gate, within the Bahrain Financial Harbour, which attracts scores of art lovers in the community.

Volunteers Bodour Yaqoub reached out for help to telecom giant VIVA Bahrain explaining the proposed project, the funding needed and the plan of action. The hospital approval then finally came together.

Once the project was secured, it was followed by Rula working for a year on the architectural design, with revisions made to meet budget and site constraints.

While Art Reach doesn’t identify strictly as a mosaic group, all its projects to date have been in that form. Mosaic is the art of creating images with an assemblage of small pieces of coloured glass, stone, or other materials.

Rula, an Iraqi-British architect and the art director of the group, said: “Mosaics have a long life span of between 15 to 20 years. They require minimal maintenance and have vibrant colours which complement the pastel colours of Bahrain. Furthermore, we have developed a technique that allows total beginners to contribute.”

The mosaic work at the unit started last September and continued for five months with approximately 80 volunteers supporting the effort. Ten formal workshops were held in Harbour Gate attended by up to 30 people on weekends or smaller numbers in the evenings.

“In addition, several of our regular members worked throughout the week to prepare and deliver the artwork to the site on time,” added Rula.

Some of the key contributions were made by Karine Hird and Jenny Bolivar who taught ceramic mosaic techniques and created some of the more challenging pieces such as the parrots, hot air balloons and butterflies.

Rula added: “Most of the mosaic work was planned conceptually allowing the volunteers to express themselves artistically.  The parameters of the design - be it colours or the shape of the tiles, is what gives the art work unity.

“We came up with a design which involved arched walls, benches and a pergola in an attempt to create a courtyard. We also added bird houses and stepping stones.

“On the benches of the pergola and arch at the hospital, the participants chose their tiles from a preselected range of coloured ones ready cut to create modules for a geometric pattern.

“The challenge was to create a framework that allowed the participants creative expression, while creating a piece of art that had a unified appearance. Accordingly, we built two structures that framed the garden and anchored it.

“As water and gardeners were scarce, it was necessary to design something that compensated for the lack of plants and colours.”

Rula designed each wall to have one single theme of flowers so that each visitor could spend time discovering and examining the walls one after the other. One wall has sunflowers, one has poppies, one has lilies and across from it are paradise flowers.

Lena used her skills as an artist with a special interest in painting nature to draw the floral motifs so that the participants could work towards one unified wall.

Little critters, such as butterflies, dragonflies, butterflies, frogs and a gecko, were also introduced on each wall with the aim of giving viewers - particularly children - a fun element of finding them.

“While working on site we noticed children peering through a window,” said Lena. “An additional mural was created with them in mind. This mural is like a picture from a children’s book featuring rolling hills, cats, hot air balloons and birds. Our hope was the image on this wall would carry the children away in their imagination.”

The building work and the installations were carried out by a team of workers from Almoayyed Contracting Group, contracted by VIVA. The telecommunication provider also sponsored all the material cost of the project such as the tiles and the equipment needed for the workshops.

The workspace has been additionally sponsored by Harbour Gate which enabled the group to work for long periods without interruption and allowed the team space to store completed pieces while waiting for the site to be ready to receive them.

Rula added: “The biggest satisfaction we have received from this project is seeing parents and their children lingering in the garden and spending time examining the walls and taking ‘selfies’.

“We have seen kids run their fingers on the dragonflies while the parents looked on. We have seen parents resting in the shade of the arches. It’s a momentary relief from medical consultations, no more and no less. Our hope is that the garden will give visitors a mental escape and a brief respite.”

VIVA’s and Art Reach’s volunteers also added plants to liven up the space and create a happier environment for the hospital’s patients and visitors. In addition, the telecom supporters also installed a brand-new children’s playground area to encourage outdoor based activities and promote children’s physical development.

The young people who attend the hospital and use the garden and playground are aged between two and 18 and come to the clinic for a range of conditions including depression, anxiety, behavioural issues and those suffering from different types of abuse.

A child and adolescent psychiatric consultant from the hospital says families now enjoying the facility are delighted. She believes that by playing in the garden and enjoying the beauty of the colourful art on display helps to reduce any stigma fears and increases trust in the care and treatment on offer.

The team who has worked on the project is thrilled with the positive feedback and say it’s only the beginning.

“Why do we do it?” asked Lena. “Each of us has a slightly different motivation but at the heart of it is an interest in serving the community, giving back to Bahrain, and living in a more beautiful environment.

“Seeing the positive impact of the garden, we would now love to carry out work on another hospital space. We have identified a few external spaces in Salmaniya and have designed proposals for them.

“We feel that redesigning these spaces can help lift the spirits of patients and visitors and help to support the health and wellbeing of the wider community.

“We also hope that the success of the children’s garden will inspire others to come forward to make a difference.  With a relatively small investment from a sponsor, the benefits of similar beautification projects could be reaped for many years to come.”

Art Reach launched in 2014, started with a simple project of creating a pretty bus stop on Budaiya road. In 2015, its members designed a shaded bench in Saar and also created a seating area in Adliya in 2016, followed by a pergola with plants and a shaded seating area in Riffa in 2017. They also designed a maze for children on the Southern Corniche last year.

Rola said: “Art Reach’s public art projects are made possible because of collaborative efforts between the private sector, civil society and the government. None of our projects belong to any one organisation, but they are offrered to the people of Bahrain at large.” 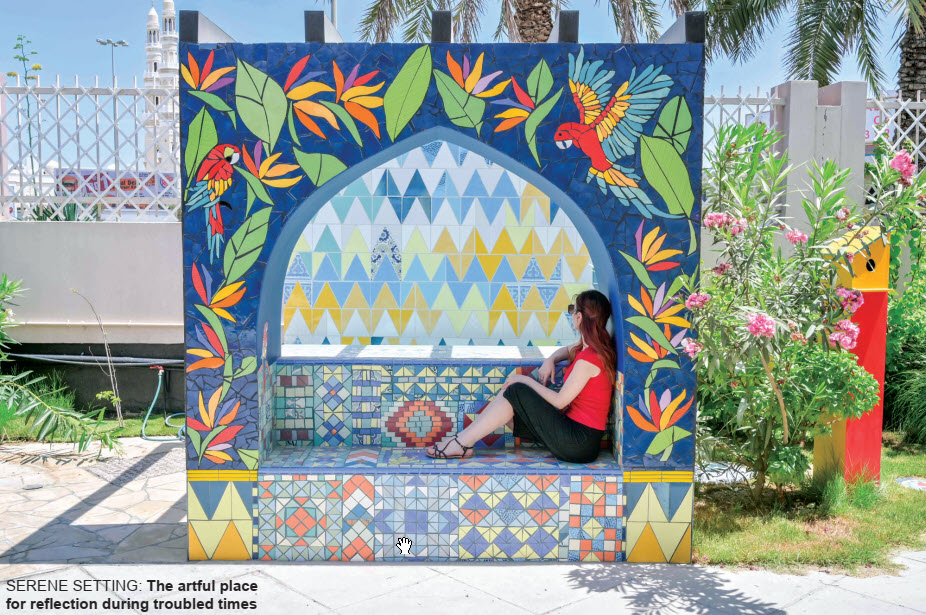 AN OASIS OF PEACE