My favourite aspect of doing Eating Out reviews is not the food, the fancy restaurants or finding alternative ways of saying, “What’s up, Bahrain?” in our videos.

For me, it is the opportunity to talk to world-class chefs about why they undertook the difficult task of whispering to bellies via their culinary creations. There is usually a moment in every interview when a twinkle appears in a chef’s eye that I know we are about to uncover a treasure trove of nostalgia and passion.

When I approach this moment, the scene in Ratatouille where Remy’s eponymous dish transports the food critic to his own mum’s kitchen replays in my mind’s eye, as I get a whiff of my interviewee’s childhood kitchen.

I had an afternoon full of these moments at Chef Nicolas Lambert’s pastry masterclass last week at the Four Seasons Hotel Bahrain Bay.

As loyal readers of the GulfWeekly may remember, we had shared some of Chef Nicolas’ childhood culinary journey in our Page 5 story last week, in anticipation of the class.

The class had a fairly simple sounding recipe to prepare: mousse with some hazelnut praline. But in all cooking and especially in pastry-making, it’s the journey that makes all the difference. And the stories that accompany it, are just the cherry on top.

Chef Nicolas told us about his first éclair class, “Our professor came into the class, gave us all the same recipe, the same ingredients and the same instructions, and set us on our way. At the end of that class, no two chefs had an identical éclair. And that’s why making pastries is so personal. It is an art, with a lot of science behind it.”

And so, to really illustrate that point, we have included the recipe and instructions for Chef Nicolas’ creation, so you can make your own version.

Chef Nicolas showed us his process, blending chocolate and butter over an electric stove (even though, he ‘prefers gas any day, but has gotten used to electric in St. Petersburg’ where he is the current Executive Pastry Chef at the Four Seasons).

He prepared the meringue, which he was only allowed to start learning when he turned 14, as a result of his parents’ protestation. Here he added a secret and rare ingredient – sea salt from France. I have never seen a man marvel at salt and the meringue making process, but again, the twinkle shone and I understood why he was a star.

And finally, after blending the two and setting them aside, he prepared the praline, with fresh roasted hazelnuts. He spoke of how to take praline from powder to paste – letting the blender run for 20 minutes, until the internal temperature hits 45 degrees Celsius and the nut oils emerge. And he talked about his personal preference for making everything from scratch so he can adjust flavours and sweetness.

When it came to presentation, he topped the pre-set mousse with praline, adding a few dark chocolate crispy balls and a few gold-topped roses made from Gianduja chocolate. I decorated mine with a few extra pieces of dark chocolate and probably a dozen gianduja roses and quickly devoured my mousse.

To call the sea salt in the mousse celestial would be high praise for the gods of pastry making themselves. It is a revelation and a revolution, packaged into one small glass. And Chef Nicolas beamed as we relished each bite.

To top it all off, we got a taste of the afternoon tea, which Chef Nicolas will be supporting till November 30. I personally can not recommend it highly enough. And in the meantime, try out the recipe below and let us know on Instagram @gulfweekly how it turns out!

The afternoon tea at Four Seasons Hotel Bahrain Bay, by Chef Nicolas, runs until Saturday from noon until 9pm and is priced at BD26.5net for two guests including tea, pastries, sandwiches, and scones served with homemade jam and cream and BD35 inclusive of an additional glass of sparkling juice. To make a reservation, call 17115500. 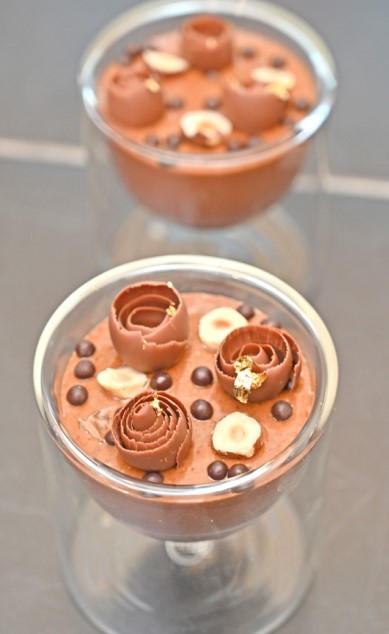