Humour for the soul

Palestinian stand-up comedian, Soap star and disability advocate Maysoon Zayid, born in the US, is spreading smiles and laughter through her site and encourages people to not give up during these troubled times.

The talented author and actress who has cerebral palsy, has performed in Kuwait, Dubai, Abu Dhabi, Egypt, Jordan and Lebanon. However, she is yet to visit the kingdom and she dreams of doing so one day, she shared with Gulf Weekly.

“It is far past time I come to Bahrain and make you all laugh,” said the Arizona State University Bachelor of Arts in theatre graduate. “Inshallah, I can make that dream a reality once we are all free from this current challenge. For now, I recommend going to www.maysoon.com and watching every single clip I have posted. Laughter is healing and that’s exactly what the world needs right now.

“I also believe that there is a time and a place for comedy. It is very important to know when it is appropriate to joke and when it’s not.

“Don’t be an internet troll. If you feel the need to type hate, Google ‘cats on glass tables’ instead.”

Maysoon, who trained at the world-renowned The Neighbourhood Playhouse School, is a co-executive producer and co-founder of the New York Arab American Comedy Festival. She is also the author of Find Another Dream on audible and a full-time touring stand-up comedian. Her book is one of the first to be released on Reese Witherspoon’s company, Hello Sunshine, where she takes the audience on her crooked journey from being born to immigrant parents in the great state of New Jersey to tap-dancing on Broadway.

The book explores scenes of disability, living with cerebral palsy, bullying, love, loss, and bigotry all told through the lens of comedy. In addition to the audiobook, there is a downloadable PDF.

She said: “My parents couldn’t afford physical therapy so they sent me to tap class. I started performing in front of live audiences when I was five and loved it. I grew up going to Broadway shows in New York City and watching endless hours of television. I always knew I wanted to be a performer.”

After graduating, she started auditioning and could not get any work. “Hollywood shuns people with disabilities,” Maysoon explained. “When I turned on the TV, I didn’t see people who looked like me. Where I did see myself was in the world of stand-up comedy. I decided to take a comedy class. I was blessed and immediately started getting paid work as a comedian and the rest is history.”

She was inspired by dancer Mikhail Baryshnikov and sports legend Muhammed Ali, who she says: “IS the greatest and like me, is Muslim and shakes.” She also finds inspiration from Dolly Parton and of course, her parents.

“My dad was my biggest cheerleader and my mother raised me to be tough as nails,” she said. “My parents were extremely supportive of my career because as a comedian, I started making a lot of money almost instantly and I brought attention to the Palestinian cause. My mother doesn’t like the fact that I curse and wants to throw a slipper at me every time I do. But otherwise, they were very supportive.”

Maysoon grew up in a predominantly Italian Catholic town and being Palestinian played a huge part in her upbringing. She was the only Muslim in her school other than her sisters.

“I was also the only disabled person in my class,” she added. “My friends were excellent. They never bullied me or excluded me. I knew I had a disability and my parents raised me to not be ashamed of it. I didn’t realise how much the world feared disabled people and discriminated against us until I became an adult and faced many barriers at college and in my career. Every single day of my life is a challenge.”

Maysoon is a full-time contributor on Keith Olberman’s Countdown show and has appeared on 60 Minutes and 20/20.

“What I enjoy the most about being a Muslim woman trailblazer in comedy is the fact that a lot of Americans don’t think women are funny,” she added. “To be one of the first comedians to perform in the Middle East, I got to challenge that myth and raise the bar for the men who follow me. Still, there is much less opportunity for women than for men. It really needs to change. “I am good at what I do and I don’t let fear discourage me from doing the things that I love.”

Her favourite role is playing Zahra Amir on General Hospital and it was always her dream to be on it. She joined the cast in May 2019.

Maysoon is currently developing, co-writing and co-producing a comedy series called Sanctuary, which she plans to star in. She is also writing a children’s comic book series, that will hopefully hit the shelves in October 2021, and has a web series called Advice You Don’t Want to Hear.

“Due to the pandemic, all of my live shows are cancelled until June,” she said. “That means I’ve lost my entire income for three months. People can subscribe and still watch me do my thing online - www.patreon.com/maysoon. This is all still very new and I am still learning to cope. I have found that having a schedule is very helpful. I do yoga, walk, dictate to my typist, hang out with my real-life friends online and watch way too much television. The thing that has helped me the most is Beyonce, my cat. I highly recommend getting a pet if you can. It makes being quarantined so much more fluffy and fun.” 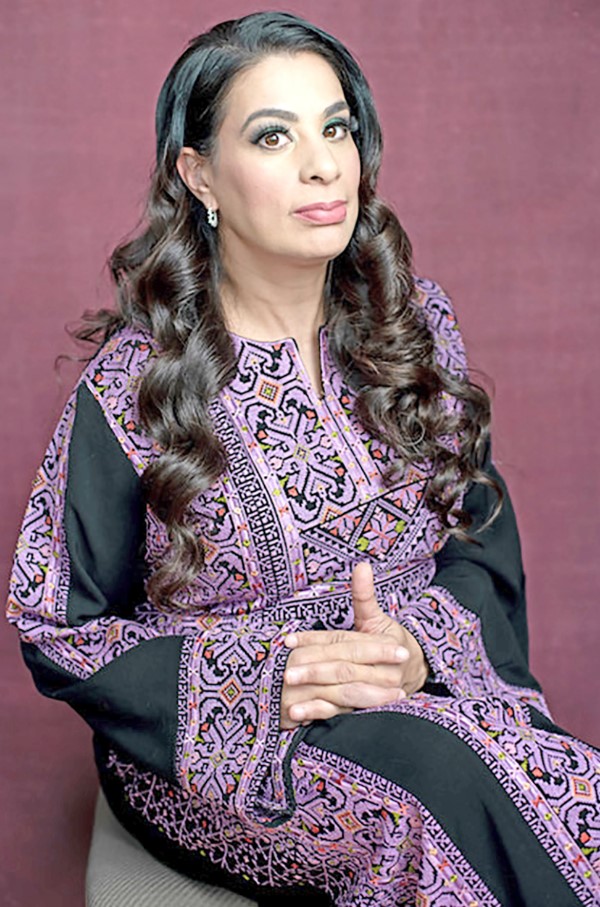 Humour for the soul