Animal-loving activist and soulful Scottish singer Sandi Thom has given abandoned Artax a second chance at life and reminds people to never give up on their furry friends.

A couple of months ago, Artax, an American Akita, was taken from a kennel where she was found in a devastating state.

Sandi, who is the chairwoman and voluntary manager for the Bahrain Animal Rescue Centre (BARC), said: “I was sent a video of Artax by fellow rescuer Fathiya Al Bastaki. Artax was in some kind of gravel pit kennel struggling to stand let alone walk. I couldn’t believe my eyes and immediately asked for the location to get her out of there.”

After research, it seems that she was imported from Russia in 2017 as a trophy dog and when she fell ill, from what was believed to be tick paralysis; she was then surrendered to a facility.

“We also discovered that Artax had her own Instagram account and was previously a very healthy looking dog,” she added. Artax was so weak she couldn’t even lift her head. She was incredibly dehydrated, horribly thin, had cuts all over her paws and mouth and was covered in ticks. While some people advised Sandi to put poor Artax out of her misery, the platinum selling recording artist refused to give up on her.

She said: “I am not a trained dog therapist nor am I a vet, but I believed in Artax from the very beginning and that belief, love and hope is what stopped me from putting her to sleep. Because of her condition, I didn’t want to bring her to the shelter so I took her home with me.”

Artax’s journey to recovery began with giving her several IVs with fluids and tick prevention. She was positive for tick fever and was started on a medicine commonly used for it called doxycycline.

“This was the first crucial step forward,” explained Sandi. “Then gradually, I began to build up her strength again as her appetite started to slowly reappear. After some time, she began to feel a bit better in herself and I had gained a little of her trust. Trust was a huge factor in all of this because think how incredibly vulnerable she was feeling in the beginning unable to move. Then, from the advice of physiotherapist Lana Peters, we started daily exercises to re-engage her spine and gradually she began to move more.”

The next step was to bring in Anissa Bennet-Carew and her holistic health practices. Anissa specialises in alternative medicine and therapies for both people and animals.

Sandi said: “I strongly believe if anyone is in a state of disease it is a by-product of a much larger internal issue. Whatever is out of balance within Artax needs to be put back into balance in order for her to be able to walk properly again. Anissa treats many of our dogs at the shelter successfully who are traumatised or abused.”

Anissa started Artax off with three sessions a week to encourage the recovery process.

Anissa said: “I used Bach flower remedies, applied zoopharmacognosy and Jin Shin Jyutsu, to help support Artax’s energetic systems to bring her back into balance so her body can then heal itself.  Since I started treating her, I have been delighted with the great progress that she has made. She is choosing a lot of the essential oils, herself, to help with both her emotional trauma and physical pain. I love working with Artax. She has such a strong personality, is incredibly determined and is clear with what she wants.”

In addition to that, Artax began hydrotherapy at Delmon Boarding Kennels and Catery which involves short bursts of swimming two minutes at a time and rests in between. She is now doing hydrotherapy every other day.

“Couple all of this together with just the feeling of love and trust that she gets from me and other volunteers who visit with her, the recovery so far has been remarkable,” said Sandi. “She is now able to take six to seven consecutive unaided steps, albeit wobbly, by herself. I believe that within one month she will be able to walk fully again and within three months she will be running around like nothing ever happened.”

While Artax has been able to find joy again, other pets have not been so lucky which is why Sandi urges people to be more knowledgeable when bringing a pet home.

She said: “I feel that in Artax’s case, it was more down to ignorance than evil. People buy these dogs because of their breed. A dog like Artax can go for anywhere in the region of BD1,500 to BD2,000 so selling Akitas is a lucrative business! At the end of the day, knowledge is everything. If you decide to own a dog, a cat or any animal, for goodness sake, educate yourself first on what to do and how to do it. Don’t just get a dog and then hand them over like faulty goods when they run into problems. Owning a pet is like a marriage – through sickness and through health.

“Rehabilitating Artax has been hard both physically and emotionally and it will continue to be until she is fully recovered. The reward of seeing her walk and run again is greater than anyone could imagine so I encourage everyone to volunteer because there is no better feeling. People can help by sharing Artax’s story as a great example to the dedication we have to our animals and the passion we put into their care and ultimately their recovery. Our motto is to rescue, rehabilitate and rehome.” 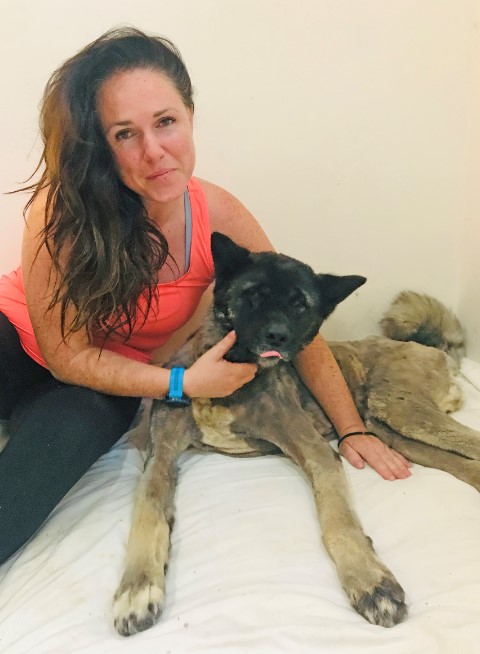