The rate of electronic waste generation has exploded by as much as five times due to an increased use of electronic devices during the Covid-19 pandemic as users stay connected like never before, an online digital debate hosted in Bahrain heard, writes Naman Arora.

A leading environmental expert expressed concern over the hidden cost of technological advancements at a webinar staged by the French Embassy in the kingdonm in commemoration of World Environment Day.

“Our smart phones alone use up to 50 different rare earth metals and minerals, which all have very environmentally-destructive methods of extraction,” said French sustainability expert in digital pollution Céline Ferre. “This has already led to a global loss of biodiversity, much higher energy consumption and rapid resource depletion, especially in emerging markets.”

This comes as the number of devices globally is set to increase from its current 22 billion to as much as 110 billion, she revealed, as a result of an increased reliance on the ‘Internet of Things’ in which a variety of household devices are connected online.

She added that the current public health crisis has also witnessed a massive increase in digital use as people connected online to avoid social contact, highlighting a list of shocking statastics such as the ‘five times’ projection.

With the advent of artifical intelligence, cloud computing and cryptocurrency mining, energy consumption has already risen dramatically, since these applications require the use of large server farms which consume more electricity and generate significant e-waste.

Around 52 million metric tonnes of e-waste was generated in 2019, according to a report by the United Nations University and while there are sustainable ways to recycle discarded devices, most companies employ low-cost, low-efficiency methods that end up having a worse environmental impact.

According to Ebrahim Hasan, IT specialist and board member of Clean up Bahrain, companies that handle sensitive data also refrain from recycling because of the risk of data leakage and corporate espionage, since most recycling companies do not employ proper data scrubbing protocol.

While e-waste is merely 1.5 per cent of the total waste generated globally, it often has a much more drastic impact, due to the metals and minerals used seeping into the ground when discarded inappropriately.

The recommendations given during the session included extending the life of mobile and computing devices on a personal level and managing online habits. Streaming, for example, is worse than downloading since it uses multiple servers simultaneously, according to Céline.

Another suggestion that was met with some resistance by an executive from a local telecommunications provider was reducing the usage of mobile data, especially newer technologies like 4G and 5G, in favour of Wi-Fi.
Celine also suggested a decreased reliance on artificial intelligence to solve human problems and an increased use of low-tech and innovative methods. One example she cited during the current pandemic involved researchers at the University of Pennsylvania’s School of Veterinary Medicine training dogs to sniff out asymptomatic Covid-19 cas 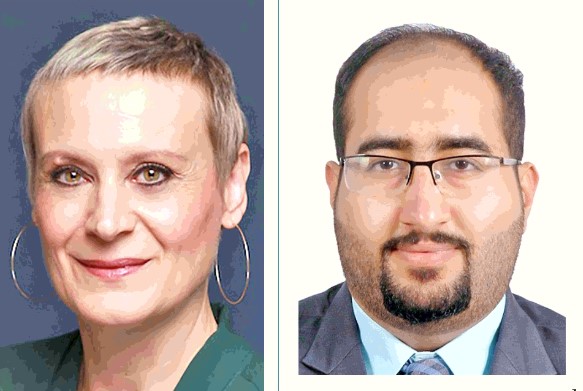