To bring attention to the mental health crisis simmering underneath the surface of Covid-related lockdowns across the world, rugby’s first “true regular playing veterans” in the Gulf region are using the break in their playing schedule to take up The Push-up Challenge.

The Push-up Challenge is an international physical challenge, during which participants commit to doing 25 push-ups every day for 25 days, and most of the Bahrain Rugby Football Club’s Golden Oldies squad have undertaken it.

Team captain Andrew Walsh told GulfWeekly: “As a team we have players stuck in various places around the world, from the UK, Saudi Arabia and Sri Lanka it is great that we can work together for a positive cause during this difficult time. The main focus is on increasing awareness and getting people to understand it is OK to ask for help.”

The World Health Organisation (WHO) has identified mental health deterioration as a significant health risk as the change in routine “can be particularly difficult for people with mental health conditions” and recommends that “at a time like this, it’s very important for people of all ages and abilities to be as active as possible.”

The Golden Oldies, ranging in age from late 20s to 60s and beyond, jumped at the chance to join in and support the cause.

Matthew Axton, 42, who lives in Shakhurah, said: “Having suffered personally in my twenties with depression, and having lost one of my best friends from school earlier this year to depression, I was determined to do this challenge to help raise the awareness of post traumatic stress disorder. Many suffer silently from anxiety and depression and this is to let people know that there are people out there willing to help and to listen. It’s very important that people know it’s OK not to be OK.”

Colin Stanley, 61, who is completing the challenge from Saudi Arabia, added: “A belief in a worthy cause, and the knowledge that your team mates are behind you, makes it very satisfying. The issues of PTSD, anxiety and depression have always been an unspoken illness that can only be combated with men acknowledging their inner worries and problems. It is paramount that help is offered to stop guys believing there is no way ahead. A number of friends have been affected where loved ones have seen no way out. This cannot go on!”

The squad has faced their own physical challenges, as men of varying fitness level undertook the commitment.

Clingham, 59, from Janabiyah, explained: “The first couple of days were hard but the encouragement of family and friends has proved very motivating and helped push me.”

Mohamed Anwar, 28, added: “At the beginning the challenge was a bit difficult because I’m a heavy guy and doing 25 push ups in one go was tiring, particularly on the joints. A week into the challenge my body started adapting to the change and doing them became like ‘a must’ as part of my daily schedule.”

In addition to fitness, certain members of the team, like Farhaz Farouk, 48, have faced other challenges during this uncertain time.

Farhaz explained: “For starters, due to Covid-19-related travel restrictions, I was stuck in Singapore en-route to my home country of Sri Lanka. I started the PTSD challenge while in Singapore. I continued it from the quarantine centre upon my return to Sri Lanka. I am currently in the last few days of the Challenge, and am finishing it off from my home. This challenge is both tough and memorable since I started it off as a “refugee” in Singapore, then in quarantine in Sri Lanka, and finishing it off as a “free man” at home!”

Members of the squad started the push-ups at different stages and while some are over the ordeal, others are in their final days, and some of the bravehearts have decided to set their hearts on continuing with a 50-day challenge. 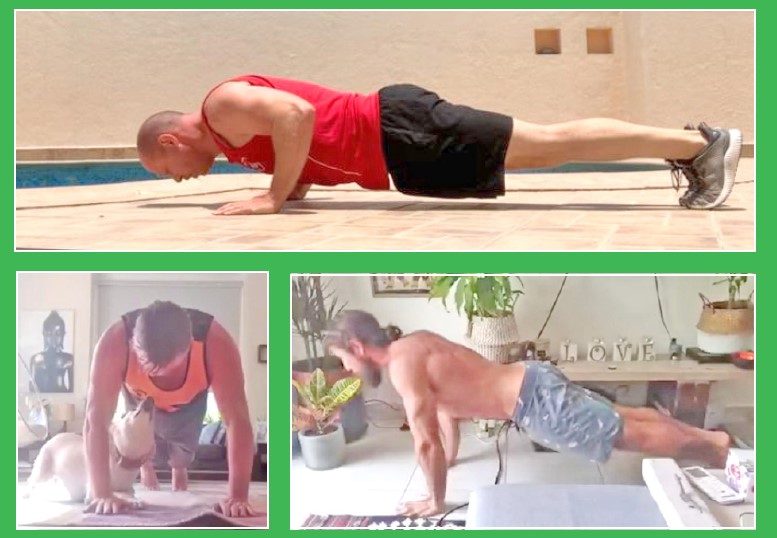