As an homage to the late Prime Minister His Royal Highness Prince Khalifa bin Salman Al Khalifa, Bahraini artists of all ages from the kingdom and beyond have been creating art pieces in honour of his legacy.

Some decided to stick to the traditional pencil and paper to sketch images of the late Premier on the day of his passing, while others took to the more contemporary digital medium.

Ebrahim Al Madani, a Bahraini artist and HR consultant currently based in the UAE, sketched an image of Prince Khalifa from memory.

“I found comfort, peace and stability whenever I spotted him on TV, which was a very strange feeling considering he was a man that I did not have a direct relationship with,” the 53-year-old artist explained.

“When I had lost my own father five years ago, it left a huge void in my life.

“I was lost trying to find a way to fill that vacuum and when I saw the late PM on TV or in the news, I started to see him more and more as a father figure.

“So when I heard of his passing, it was like losing my father all over again. And, when I sat down in front of the paper, the pencil just moved from memory, and in less than an hour, the piece had all but drawn itself, taking me on a dive through Prince Khalifa’s persona and life.

“Drawing a portrait allows me to develop a deep understanding of the person I am drawing. I start by sketching the outlines and I research and read about the person so I can relate to every line I sketch.

“Fittingly enough, my journey in portraits started with a drawing of my father – a man who taught me that the sky was the limit when we really want to do something.”

Ebrahim had his first exhibition 21 years ago, paying homage to the heritage of his adopted home, the UAE and members of the royal family of Ajman. After two decades of a gap, he only picked up his pencil again last year, creating an Instagram account to share his pieces.

For Bahrain Bayan School student Maryam Al Qabbas, the late Premier was a ‘role model to all the citizens and people’, and this inspired her to pick a picture depicting Prince Khalifa ‘in his glory’.

“Prince Khalifa was an icon for me and his passing surprised and saddened me,” the 16-year old Grade 11 artist added.

“I chose this picture simply because it showed him at his best and I liked how the lights and shades were reflected on his face.

“When it comes to sketching, I always love using the Blackwing pencil on Arches hot pressed paper. This combination gives an amazing smoothness and texture to the sketch.

“I start a portrait usually from the face, mainly mapping out the eyes, nose and mouth, and then move to the head, which in this case is the ghutra. I then move on to the cloth, and finally, the shading.

“After completing all that, I decided to include the Arabic calligraphy phrase, which translates to, ‘We belong to Allah and to Him we return’.”

The 36-year-old from Hamad Town said: “What inspired me to create these artworks for the late Premier was his wisdom, humility and kind treatment of people, in addition to his fear for the interests of people.

“The artworks are currently preserved and I have not printed them yet but they can be printed in any size.

“They are an appreciation of his illustrious career and unlimited generosity.”

Mixed media artist Thajba Bahar may have had her pieces featured in exhibitions all over the Middle East but few have been as close to her heart as her sketch of Prince Khalifa.

“Coming from Muharraq, the loss and love I felt for the late Premier can be traced back to the days of my grandparents, who instilled in us the value of loyalty to leadership and government,” the 33-year-old graduate of Kuwait’s Institute of Fine Arts explained.

“For generations to come, Prince Khalifa will live on in our hearts and inspired by this legacy, I was moved to put pencil to paper.

“It took me five to six hours to complete this piece, during which I reflected on how Prince Khalifa’s legacy has shaped today’s Bahrain.

“I chose 2B & 4B Staedtler pencils and an A2 sketch pad as my medium. I started the sketch from the head and face outline, ending with eyes, nose and mouth, after which I shaded the piece, highlighting key details of his face. 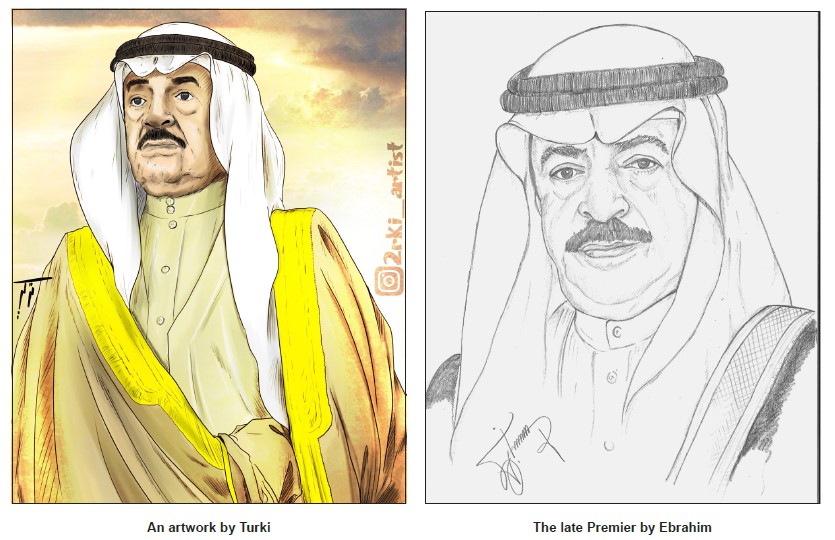