Bahrain’s first-ever satellite, which may revolutionise the global understanding of lightning storms, is set to be launched from the International Space Station (ISS) later this month.

And the kingdom’s space team could not be more excited!

For the seven-person team at the National Space Science Agency (NSSA), the successful orbit of Light-1 will be the fruition of more than three years of diligent efforts, energy and collaboration with international space science agencies.

“Our team has been working on the project since March 2019, which is when we received the initial mission, definition and concept,” NSSA engineering specialist Aysha Alharam told GulfWeekly.

“We were supposed to launch by mid-2021, but due to the Covid-19 situation, we postponed it.

“During 2019, we designed the mission concept and then did a critical design review in 2020. It was during the second half of 2020 that we started building the satellite.”

After construction, the second half of 2021 was spent conducting final environmental and safety reviews.

The nanosatellite Light-1 was launched aboard the SpaceX Falcon-9 CRS-24 on December 21, 2021, from the Nasa Kennedy Space Centre in Cape Canaveral, Florida, US and docked at the ISS the next day.

It is a joint project between Bahrain’s National Space Science Agency (NSSA), UAE Space Agency, Khalifa University and New York University Abu Dhabi and it will be used to conduct research during lightning storms that will help civil aviation safety experts in future.

The Light-1 satellite was named after His Majesty King Hamad’s book, First Light.

Now that it’s on board the ISS, the astronauts at the space station will launch it in the next several weeks.

The nanosatellite – approximately 10cm x 10cm x 34.5cm in size – will be in orbit at an altitude of 400km, at an orbital incline of 51.6 degrees. It will complete an orbit approximately every 90 minutes.

Its transceiver uses an ultra-high frequency (UHF) band, with a secondary S-Band for downloading large amounts of data transmitted to three ground stations in Abu Dhabi, Denmark and Lithuania.

“We will be receiving data twice a day from the satellite,” NSSA engineer Ahmed Bushlaibi explained.

“Our research from the data collected will focus on Terrestrial Gamma Ray Flashes (TGFs) – a topic about which there is very little research and academic output.

“So Light-1 will add to the global research about the intensity of TGFs by measuring when and where these flashes will occur. Once we have this data, we can conduct our analysis to identify the impact of TGFs on airplane markets, the people on board the aircrafts and the atmosphere.”

TGFs were discovered in 1994 by the Burst and Transient Source Experiment, on the Compton Gamma-Ray Observatory, an American National Aeronautics and Space Administration (NASA) spacecraft.

TGFs challenge current theories about lightning, especially with the discovery of clear signatures of antimatter produced during lightning storms.

In the past 15 years, space scientists have determined that among the processes of lightning is some mechanism capable of generating gamma rays, which escape the atmosphere and are observed by orbiting spacecraft.

The role of TGFs and their relationship to lightning remains a subject of ongoing scientific study, to which Bahrain’s space engineers and scientists are hoping to be significant contributors.

In the meantime, the team of seven is focused on building Bahrain’s capacity and dreams of seeing the day when the kingdom’s space sector can support a Bahraini astronaut’s trip to outer space. 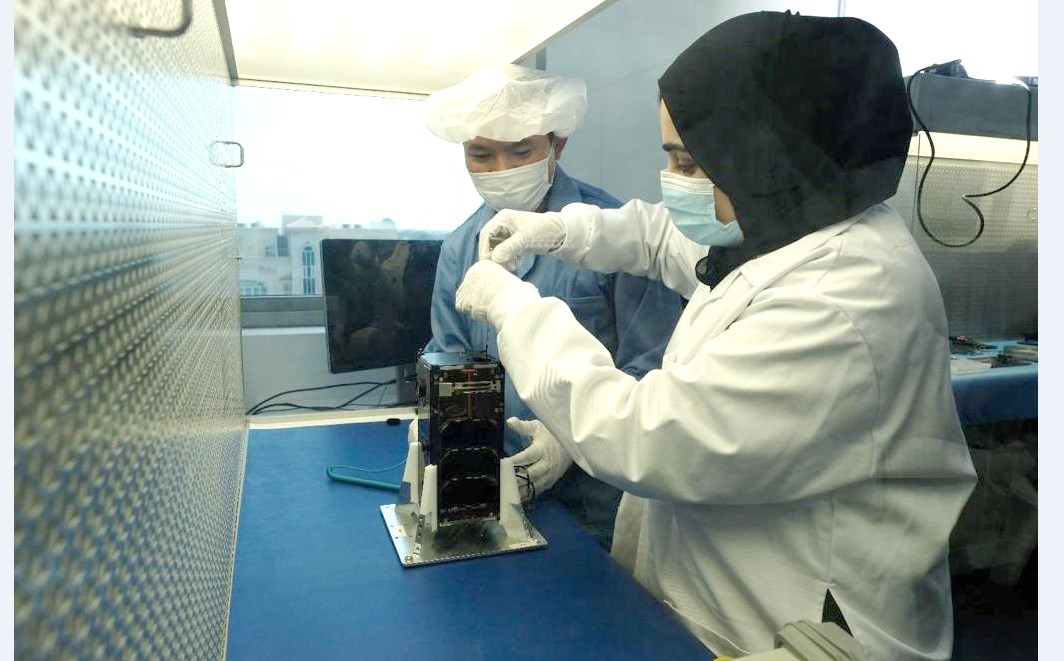