A YOUNG and ambitious Bahraini, Nadeen Yateem, is aiming to sweep through the 2022 Muay Thai World Championship in Abu Dhabi this month in a bid to clinch gold and inspire women across the island to take up the sport.

The fierce 22-year-old, who secured her spot on the kingdom’s Muay Thai national team as the first Bahraini female fighter at the beginning of Ramadan this year, will be taking on the best players in the International Federation Muayhai Association’s Senior World Championships from May 26 to June 4.

The contest will see the Under 23 and Elite divisions compete for podium positions at the pinnacle event for the world’s top athletes. It will be the first in the qualification series for the World Combat Games 2023 in Riyadh, Saudi Arabia, with gold medallists directly qualifying and other finalists gaining valuable qualification points in the rankings race for the global event.

In preparation for this feat, Yateem is training twice-a-day, six-days-a-week, with Hamad Alsaleem, head coach and one of Bahrain’s top Muay Thai committee members who recruited her to the national squad, in a bid to raise the kingdom’s flag high and motivate women to go for whatever they believe in…as she did.

“My goal is to inspire women across the island to pick up this sport, or any other, because if they put their minds to it, they can achieve greater things in life,” said the video production manager from Tubli, who studied web media in Bahrain Polytechnic. “I believe it’s never too late to join if you really wish to. I originally started with the intention of just being fit; however, the more I went to classes, the more I fell in love with it, particularly the seriousness and discipline associated with the sport. It made me see the sport in a different way: It’s not just two people in a ring fighting each other; it’s a lot of mental games - for your opponent, and yourself.”

Muay Thai, sometimes referred to as Thai boxing, uses stand-up striking along with various clinching techniques. It is fast-paced and combines both boxing and kicking in one swirling melee of a bout. In Thailand, it is known as ‘the art of eight limbs’, referring to the eight points of contact that are used to strike the opponent using fists, elbows, knees and shins. Clinching, sweeps and throws are also used strategically in modern Muay Thai to make it an all-rounded combat art.

There are many benefits of joining the sport. It is a great calorie-burner that strengthens the body and the mind, while also boosting the fighter’s confidence. As a cardio-intensive sport, regular training can also reduce blood pressure and strengthen the heart. It is also an excellent self-defence skill, especially for children and women.

“This sport helps release the negativity and stress of your daily life in addition to gaining discipline,” she said.

Yateem loved it so much that she pushed her trainer to put her into camps and prepare her to be a fighter even when she had no battles coming up.

She competed in her first local in-house fight in April 2019, which she won, and secured a second fight five months later in Abu Dhabi’s Cobra Gym, which unfortunately ended with a loss. However, she redeemed herself at the Dubai Muscle Show in 2019 that resulted in another win.

“Later on, I decided to go to Thailand to step up my training and got myself a pro-rules fight in Rawai National Stadium in Phuket,” Yateem said.

Now, the brave woman is putting all her fighting experiences and non-stop tutelage from Coach Alsaleem to good use in the upcoming competition.

“It is tough but exciting as I have to be mentally and physically prepared,” she said.

“Trainings have increased with more intense workouts. I also have to watch my nutrition and food until the competition.”

Yateem is grateful for her family’s support throughout her journey and hopes that everyone gives themselves a chance to try something new as they might end up finding their passion too.

“As long as you believe in yourself and put your heart into something, you can achieve anything,” she said.

“To all the women out there, I will always support you whenever I can, because there can never be enough strong women in the world!” 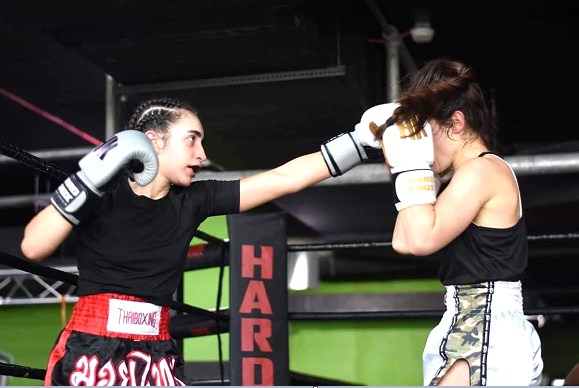