The 109th edition of Tour de France, the most prestigious cycling event in the world had a fitting start in the country regarded as one of the safest for cyclists, with more than 7,500 miles of dedicated routes.

The race, which started in Copenhagen, Denmark, last Friday and will enter Belgium and Switzerland, was ideally taking cyclists past the burial site of Viking King Harald Bluetooth (now more famous for his name than conquests), and the UNESCO World Heritage sites at Jelling and Christiansfeld.

Quick-Step Alpha Vinyl riders took the first two stages. The prestigious opening was a 13km time trial which was won by Yves Lampaert while Fabio Jakobsen won the first sprint having carefully managed the potentially hazardous crosswinds on the Great Belt Bridge. He was unable to follow that with another victory with Dylan Groenewegen winning a photo finish.

The passionate Danish fans certainly provided a hero’s welcome to last year’s runner up, Jonas Vingegaard, one of the few men capable of dropping the race favourite Pogacar.

The Tour de France is effectively 21 races within a race – and even then, there are a number of sub categories that the riders aim to win; meaning there is always plenty to watch out for.

Preparations for le Tour did not exactly start well for Team Bahrain Victorious after the team was raided twice, disturbing riders and management in the night.

The team, as it did during the tour in 2021, have co-operated fully yet remain frustrated at being continually targeted with little or no communication as to the reasons or outcomes.

Since entering the world of UCI cycling in 2017, Bahrain Victorious has been making steady progress. Dylan Tuens claimed the team its first stage win in 2019 on La Planche des Belles Filles before claiming another last year in Le Grand Bornand. The two stage wins for Matej Mohoric including a stunning solo breakaway on the climb up the Signal d’Uchon helped Team Bahrain Victorious to the title of best team. Mohoric has continued 2022 where he left off with victory in the Milan-San Remo “monument” race.

They are joined by Italian climber, Damiano Caruso, Jack Haig and Fred Wright as riders with the potential to succeed as the team hunts for further victories with Wright potentially looking to secure a podium finish in the white jersey competition for the best young rider.

His task is made harder by having to compete in this category with the overwhelming favourite for the overall race victory, Pogacar. The two-time winner seeks to make history by joining an elite category of only five cyclists to have ever secured three consecutive victories.

He looks in ominous form having won three times this season and already taken time out of his main rivals in the individual time trial and will be looking to add to his six stage wins in La Grand Boucle.

Based on early-season results Roglic looks to be one of his main contenders after victories at the Dauphine and Paris-Nice while teammate Wout van Aert is probably one of the best all-round cyclists competing.

Ineos has a strong team led by previous winner, Geraint Thomas, who arrives having won in Swizterland, albeit against a weaker field as Covid continues to make its mark.

The fifth stage, held today, will be one of the most interesting and potentially decisive with 11 different sections held over treacherous cobbled roads in the final 80km. There is an adage that you cannot win a race at this stage but you can certainly lose it. The leading contenders may look to simply avoid trouble although that could open the door to risk-takers (as with Nibali in 2014). Mohoric is looking forward to this stage.

“My goal in this year’s Tour is to try and win a stage again,” he said. “My favourite stage will be stage 5 with the finish at Arenberg forest”.

The first summit finish of the race on Stage 7 will bring fond memories for Dylan Teuns after his victory in the same town in 2019 which preceded his proposal to his wife.

The race properly heads into the mountains on Stage 9 with both this and the following day producing opportunities for stage wins for TBV.  With no major climbs, the main contenders are likely to mark each other leading to potential victories for riders that manage to breakaway early in each stage.  With such a versatile squad Bahrain Victorious have a number of intriguing tactics to unleash.

The Swiss Alps are just a warm-up for a brutal day on Stage 11, featuring two massive climbs in the final 80km. The lengthy Col du Galibier is the high point of the race, while the Granon is the highest stage finish since the Galibier in 2011. It is this type of stage that excites Jack Haig as he looks to fight for the General Classification (GC). “I’m feeling really good coming into the Tour and maybe a little more relaxed this year than last year,” said Haig. “For my personal ambitions, I want to go well in the GC, and if I get a top 5 finish by the end of the Tour, I’d be quite happy. For the team’s ambitions, we will look for some stage results, with the strong guys who will have opportunities to look for some results themselves.”

The Tour de France concludes on the Champs-Elysees in Paris on July 24 after 3,350km of racing.

Lead Sports Director Gorazd Štangelj said on the team’s overall objectives: “Our goal is to take the team’s first podium at the Tour de France, which we narrowly missed out on with Landa back in 2020.

“We’ve selected a really strong group of riders for the Tour. It’s a Tour with plenty of challenges. I think we have got a group of riders to cover all these difficult challenges and support our leaders, Jack and Damiano, to achieve our objective.

“We will also be looking for chances with our other riders to take stage wins or help us gain time for our overall objective. I’m convinced we have a strong team for the race itself.” 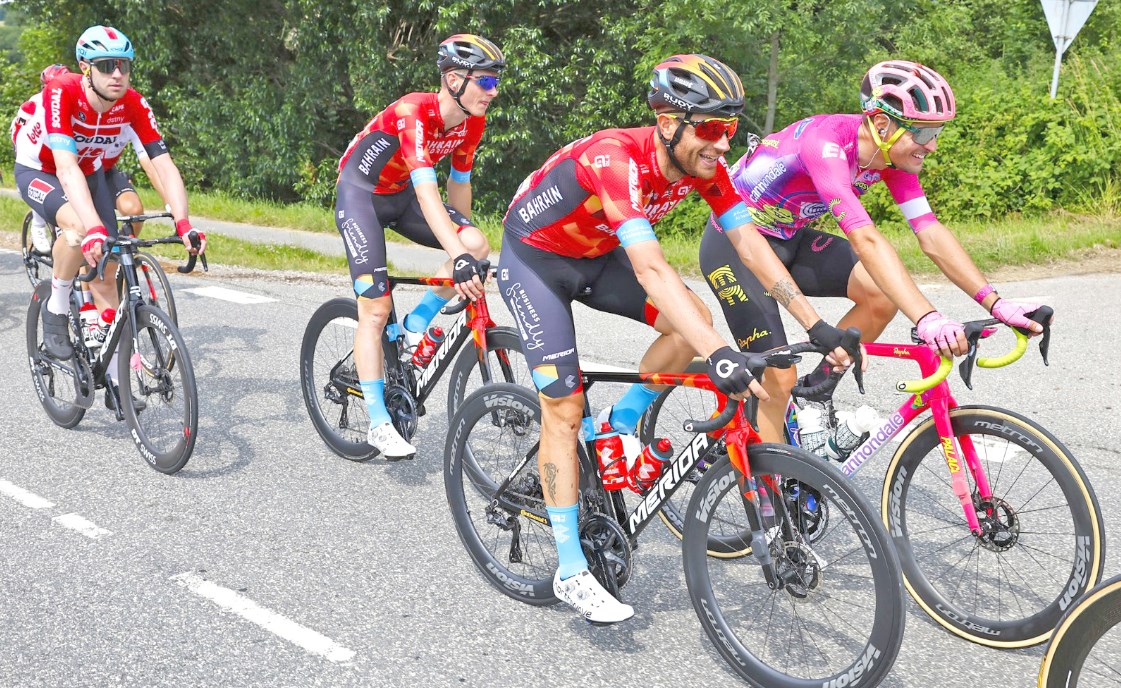