Celebrating the land of palms

People from across the kingdom flocked to the Farmer’s Market in Hoorat A’ali over the weekend in a bid to raise awareness and celebrate the prominence of palm trees and dates in Bahrain.

The National Initiative for Agricultural Development (NIAD), in co-operation with the Farmers Market Department of the Bahrain Development Bank (BDB) and the Municipal Affairs and Agriculture Ministry, staged the third edition of the cultural heritage event ‘Khairat Al Nakhla – Palm Tree 3 Festival’, to encourage and support the local production of palm products and to preserve its agricultural identity.

The three-day fruitful festivities were inaugurated by NIAD secretary general Shaikha Maram bint Isa Al Khalifa who stressed the importance of the event as it represents a significant aspect of Bahraini heritage.

“I love this festival because it’s such a happy occasion that brings everyone together after so long,” said Shaikha Maram. “I see the joy in people’s eyes - be it the stall owners or visitors. It’s a beautiful and happy occasion to celebrate our harvest of dates because this is the time of year for it and it’s everywhere you look.”

NIAD’s objective is to enhance the sustainability of the palm cultivation sector, to increase the local production of dates and to develop local industries based on palm’s assets.

“Also, it takes everybody to put in an effort towards propagating palms, taking care of plants and increasing greenery in Bahrain,” added Shaikha Maram. “All I can ask is for each person to do their bit to contribute towards greening Bahrain and making our environment more healthier and beautiful.”

BDB chief executive Dalal Al Qais and assistant under-secretary for agricultural affairs at the Municipalities Affairs and Agriculture Ministry Dr Abdulaziz Mohammed Abdulkarim, were present at the opening ceremony along with a number of Bahraini farmers, agricultural companies, artisans and productive families.

Visitors browsed through stalls boasting a variety of dates and products made using parts of the popular tree, while the Interior Ministry’s Police Band played patriotic songs.

Ghada Shawki, a stay-at-home mom and a virtual teacher, from Malkiyah, heard about the festival from her friend and attended it with her son Salman, 12, a student at Kanoo International School.

“I liked the idea of celebrating the palm tree because it’s such an integral part of Bahrain’s culture,” she said. “It is a symbol for the kingdom.”

Farmers Mirza Hassan Mansour from Bu Mohammed’s Farm and Bu Ahmed from Sadiq Mirza’s Farm showcased a variety of dates for all to savour including the most favoured type of all, Khlass. The date mascot, which entertained children at the market, was even named Khlassi after the much-loved delicacy.

“The best one and most favoured is the Khlass for its sweetness and all its nutritious benefits,” said Bu Ahmed, who featured four types of dates including the top seller and Barhi, Shishi and Khunzi.

Meanwhile, Mirza is thrilled for the return of this festival which he says was even bigger in 2019.

“This festival is grand and we look forward to it every year,” said Mirza, who had nine types of dates at his stall. “Our land is that of a million palm trees and we should celebrate it. This festival brings back a sense of nostalgia, reminding us of the beauty of the palm and a time when everyone celebrated the palm tree.”

A selection of food items made from dates such as date jam, date ice cream, milk flavoured with dates and date pickles were also featured.

The Municipalities Affairs and Agriculture Ministry also showcased types of insects such as red palm weevil, fruit stalk borer and termites that harm palm trees as well as the different methods such as pheromone traps being used to preserve the trees.

According to a spokesperson from the ministry, Bahrain has around 500,000 palm trees which we should strive to protect from insects. The termites, for example, attack the branches while the weevil goes for the trunk.

Godfrey Kuo, a consultant of tissue culture laboratory from a Taiwanese company, is working alongside the ministry to help protect the palm.

“The number of palm trees is reducing in Bahrain because they are being affected by these kinds of insects,” said Godfrey. “We are trying to protect the trees and propagate them as well. We want to help Bahrain be more green. These problems are serious in Bahrain, Saudi Arabia and the region so we need to do our best to save them.”

Tools including sickles, made by Bahrainis, were on display.

The festival also featured a number of entertainment and cultural activities with the participation of productive families and craftsmen.

Exhibitors such as Zainab Abdul Jabar Juma, known as Umm Mousa from the Bahraini Productive Family, showcased products extracted from palm trees such as ropes, baskets, cages and furniture.

Zainab proudly displayed her basket weaving and palm making skills that she has been practising for 22 years and learned from her mum Madinat and grandmother Fatema.

“The palm tree is a treasure to those that know how to truly capture its essence,” she said. “Sadly, a few people care about palm trees but that’s why it’s great to have festivals like this. It will remind people of the significance of the tree. Palm roots, for example, were used as pillars in homes in the past.

“Fronds were used as walls and ropes were made using materials from the leaves. There was even a time when women made mats using the palm and wove baskets to put their belongings in or wash rice, for example.

“We don’t waste anything from the palm.”

Cut fronds are also used for fishing nets, the leaves are used to weave baskets and pollen is scraped from the leaves to produce pollen water for medicinal purposes. Dates are also considered a holy fruit in the Middle East, which is why the date palm is regarded as the ‘Tree of Life’.

Historians believe that dates are ancient fruits that were cultivated around 8,000 years ago. There are more than 200 varieties of dates with different shapes and flavours. However, all of them are the same in nutrition.

“The market features nonstop events, and hopefully within the coming months, we will have a few pop ups coming up aside from major events such as the one for National Day,” explained Nermin. “We do have different seasons. The season for vegetables and fruits starts from September and we will be focusing on different categories and taking it forward with events and activities. It’s always busy and packed here.” 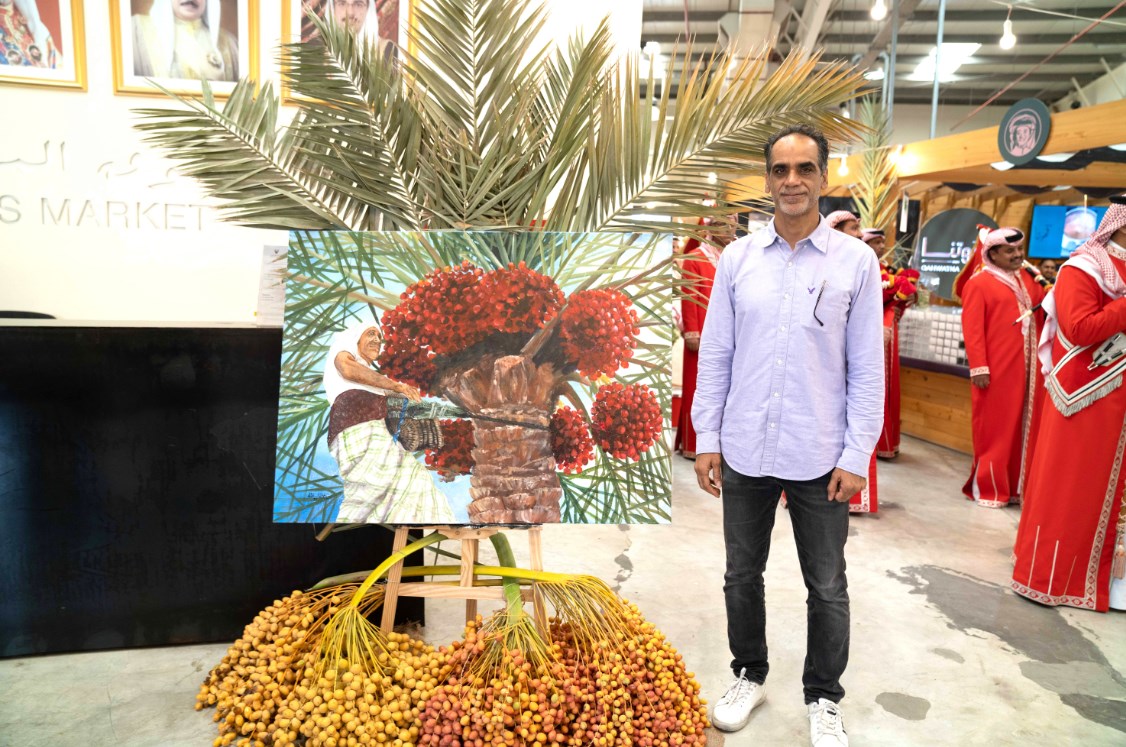 Celebrating the land of palms