Bahraini chef Suman Ali Sayed is building cultural bridges between Canada and the Middle East by partaking in the Canadian Artistic Food Expo 2022 and hopes to inspire more women to get whisked into the field of gastronomy.

The 29-year-old, known as ‘The 86 Kitchen’ on Instagram and YouTube, joined culinary greats such as Food Network celebrity Chef Massimo Capra in the City of Belleville in Ontario to showcase their skills, share their wisdom and discuss the different ways to join the industry....which she says is still heavily male-dominated.

“The goal is to aspire more women to enter the culinary industry,” said Suman, who currently lives in Toronto and is the director of quality assurance at Reef Kitchens, which is one of the world’s largest Cloud kitchen companies.

“I come from a very humble background. My parents migrated to Bahrain in the 70s and worked hard to provide for us.

“We lived in Riffa. My father was in a labour-intensive government job and my mother was a full-time teacher and earned extra income by conducting tuition classes, sewing clothes, preparing meals and even doing bridal henna.

“As years passed, my older siblings and I established ourselves a blessed life. However, it is important for us to respect and honour our roots and the hard work that our parents put in for us. Their journey inspires me to continue putting my best foot forward.

“I have learned from them to not give up on your dreams, to hone your talent and when you are in a place of power, to give back to your community and your people.

“It is crucial to aspire, to uplift and to influence others positively. I would love to encourage more female chefs to never give up. It is a competitive industry, but we can do it!”

She was invited by the organisers Saffron Hub - a national Canadian not-for-profit organisation established to celebrate and promote women food entrepreneurs throughout Canada - to participate in the food expo which focuses on cultural speciality food, food equipment and technology and food demos.

The event, held on August 6, was inaugurated and attended by the Belleville City Mayor Mitch Pancuik and other Canadian members of Parliament. The second expo will be held virtually on August 20.

“I was invited as part of the Impactful Culinary Leaders who are game-changers in the industry,” said Suman.

“Part of the organisation is focused on collaboration outreach with the Middle East region and I was appointed the spokesperson and ambassador for the Middle East-Canada Outreach Path.

“It was also an amazing opportunity to cultivate and educate expo visitors about our beautiful island — Bahrain, and its special ingredients and cultural cuisine.” 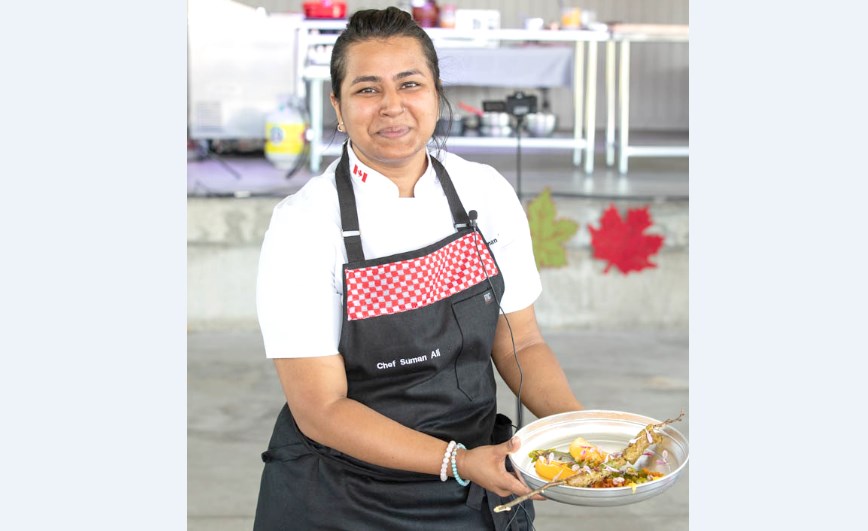