Nothing can stop us

Bahrain’s para-athletes proudly returned from the Marrakech 2022 Grand Prix in Morocco with medals around their necks and breaking their personal best.

Roba Alomari and Mariam AlHamadi from the seven-strong team have each secured golden glory and sparkling silver in the competitive event, which is part of the Grand Prix series held under the aegis of World Para Athletics.

They both have surpassed the first stage of qualifications and are now eagerly waiting to get through the second round to be held in Dubai in February next year. A win in Dubai will confirm their spots in Paris in the World Athletics Games 2023 and the Paralympic Games in 2024.

Until then, they will continue training hard and revel in their Moroccan victories.

Bahraini Paralympian Alomari, who has competed in the UK, the UAE, Kuwait, Morocco, Indonesia, China, Brazil, Oman, Tokyo and South Korea has clinched more than 25 gold, 13 silver and six bronze medals in her sporting career. She had participated in the Grand Prix series in 2019 landing three medals – gold in discus, silver in  javelin and bronze in shotput. This year, she achieved two gold in javelin and discus throw and a silver in shotput.

“I was excited about winning gold in discus,” said the 31-year-old from Hamad Town. “The reason being that I recorded my personal best of 23.15cm. What made the victory special is that I took the first place from the athlete who came fourth, just ahead of me, in the Olympics.”

AlHamadi is also thankful and proud of her accomplishments having come first in shotput and taken silver in discus.

“It was a tough competition and I’m proud we did what we could, broke some records and landed positions,” said the 18-year-old from Hamad Town. Alomari first recognised AlHamadi’s talents while she was playing a volleyball game in school at the age of 12. She told her about the Paralympic team and federation, which she then joined in 2016.

“I am so glad to have joined the team as I have travelled around the world to participate in different competitions such as the World Youth Games in Switzerland in 2019 and met so many people,” said AlHamadi. She started competing in 2018 and has won around 18 medals in total between shotput, javelin and discus.

Around 450 para-athletes from more than 40 African, European, Asian and American countries took part in the competition which was the sixth International Para Athletics Meeting.

“I’d like to thank the team’s management and delegation including chef de mission and board member in the Bahrain Sports Federation for Disabilities captain Abdulla Alhusaini, technical director and administrator Eman Hussain and our coach Hussain Muftah, who really worked hard with all of us, especially during obstacles,” said Alomari.

“All the numbers we broke during this competition is thanks to the effort he put in with us.” 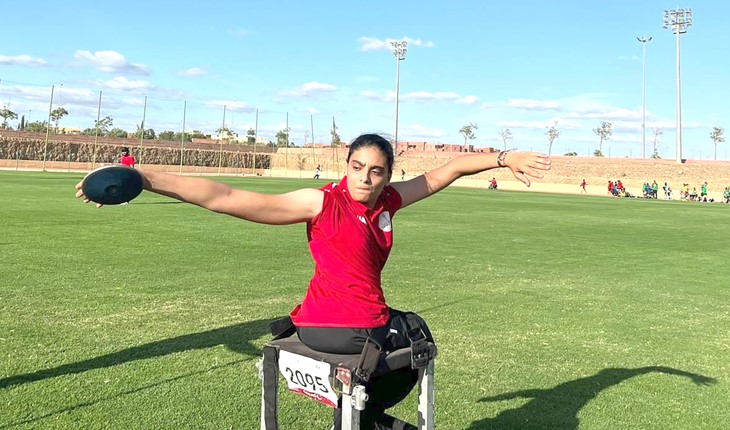 Nothing can stop us