Artists in Bahrain are turning to crypto-technology to add creativity and security to their pieces and make them more attractive to art investors.

Around the world, artists are integrating Non-Fungible Tokens (NFTs), in particular, to offer digital art connoisseurs unforgeable and unforgettable additions to their collections.

For the uninitiated, NFTs are unique computer-generated codes that are embedded into assets, like art pieces, enabling them to be traded and verified for authenticity.

Bahraini toymaker Abdulla BinHindi is one of the first creatives in Bahrain to embed NFTs into his popular toys, inspired by his childhood and the kingdom’s culture.

“In the past few years, I have been following talented digital artists, some of whom like world renowned Beeple, have been adding NFTs to their art,” the 27-year-old creator told GulfWeekly.

“As it started to become more prevalent, I also began exploring the technology.”

In March this year, Mike Winkelmann, better known by his moniker ‘Beeple’ sold his art piece Everyday: The First 5,000 Days for an astounding $69.3 million (BD26.1m).

With the embedded NFT token, the collector who purchased this piece can digitally sell it – letting the buyer verify its authenticity and see its ownership history.

The most popular blockchain technology for NFT art pieces is Ethereum, an open-source decentralised platform that is more widely used beyond its currency functionality than its celebrity cousin, Bitcoin.

Both Beeple and Abdulla have used Ethereum to generate NFTs for their creations. Abdulla has taken it one step further by generating unique NFTs for the physical Karak Monster toy, as well as its digital renderings he creates.

“I plan on rolling out more of my characters when I am done with all the Karak variants,” he said.

“That way it offers collectors a chance to pick the varieties they like most in each character collection while not churning out too much in one go. Maintaining consistency is my priority at the moment.

“I picked Ethereum because it was the most prevalent and developed choice in the NFT market and also due to its implementation in most marketplaces.”

Abdulla has listed his work on Opensea, Foundation and Rarible, with his Karak Monster NFTs primarily sold on Rarible. So far he has sold seven pieces.

“Collectors see the value of investing in the artist and their work along with how they grow in the space,” Abdulla explained.

“The advantage of this system is that it’s always tracked and traceable. So the information cannot be lost as it may in the real world. Another advantage is having them embedded into the blockchain where there is more control over certain parameters in the smart contracts, such as royalties for artists.

“Coding or creating smart contracts is not something I am too informed on. However, the platforms used to sell allows artists to put in the parameters they would like before minting NFTs, such as royalties, editions, pricing, auction terms and general details of the project.

“It makes it easier for artists to get in and start putting up their work.

“However, the downside is that it needs constant upkeep.

“Due to its digital nature, all marketing and movement of work comes through networking via social media, either through Twitter or Clubhouse.”

Meanwhile, Bahrain-based French street artist Arnaud Rothfuss has decided to go down a different path altogether by integrating cryptocurrencies into his artwork itself.

Cryptocurrencies, like Bitcoin and Ether, are seen as attractive investment vehicles and potential replacements for traditional fiat currencies like dollars and pounds.

“The concept of this painting, called CreARTcoin, is to speak about emerging technologies and interact with the audience because I hide real Bitcoin on the artwork,” the 32-year-old artist explained.

“The buyer wins bitcoin money and gets an original 180cm x 90cm painting, made with acrylic, spray paint and air brush.

“I hide a QR code inside and to find it you need to check and analyse every millimetre of the painting, like treasure hunting.

“Adding cryptocurrency gives a real value to it, because once you buy this painting the artwork’s value will be correlated to the Bitcoin investment market.”

Currently, the price of Bitcoin stands at BD21,831.67, but what portion of a bitcoin Arno plans to integrate into his artwork remains unknown.

The painting itself is a parody of The Creation of Adam by Michaelangelo, which forms part of the Sistine Chapel’s ceiling.

“On the original fresco the right hand symbolised the hand of God, but in my painting, I drew a robot hand almost touching a human hand fading into pixels against a Matrix-inspired background.”

As more and more artists find creative ways to integrate cryptographic technologies, many may find it daunting to enter the field due to the potential high technology barrier. However, Abdulla says the hurdle can be easily overcome with information freely available online.

“It is a new avenue I encourage digital and physical artists to explore,” he said.

“I see a lot of potential and talent in Bahrain and the Gulf, so it is just a matter of time until it gains popularity here. Right now, I am trying to get it more known and out there for local artists.”

To learn more about Abdulla and Arnaud’s artwork and invest in it, follow @abdulla.binhindi and @rn2on on Instagram. 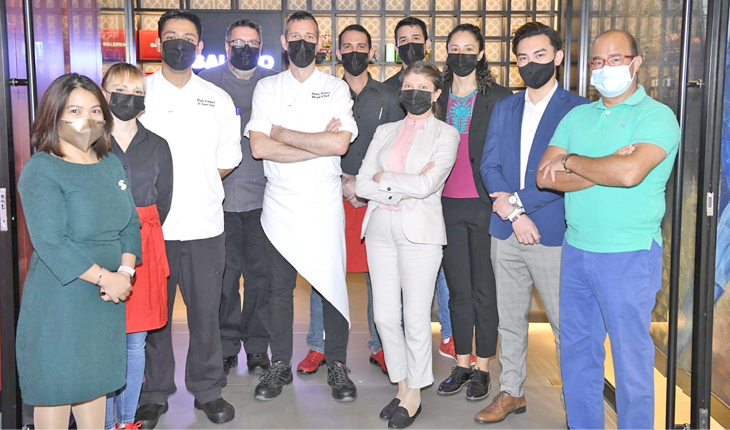 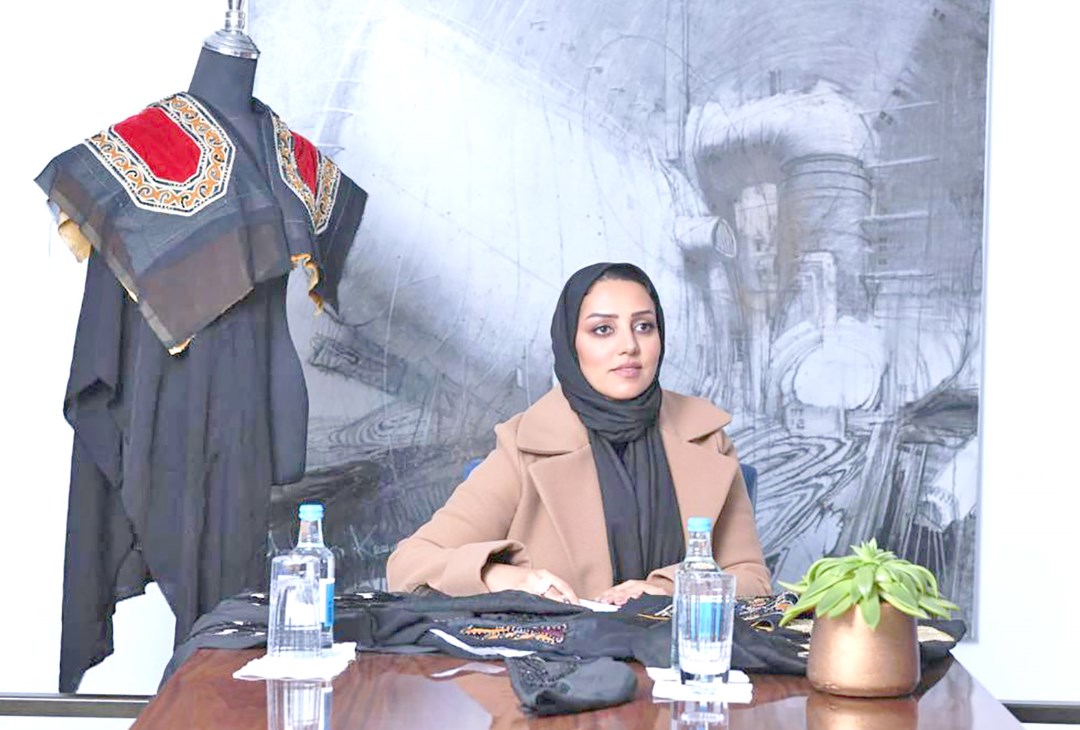 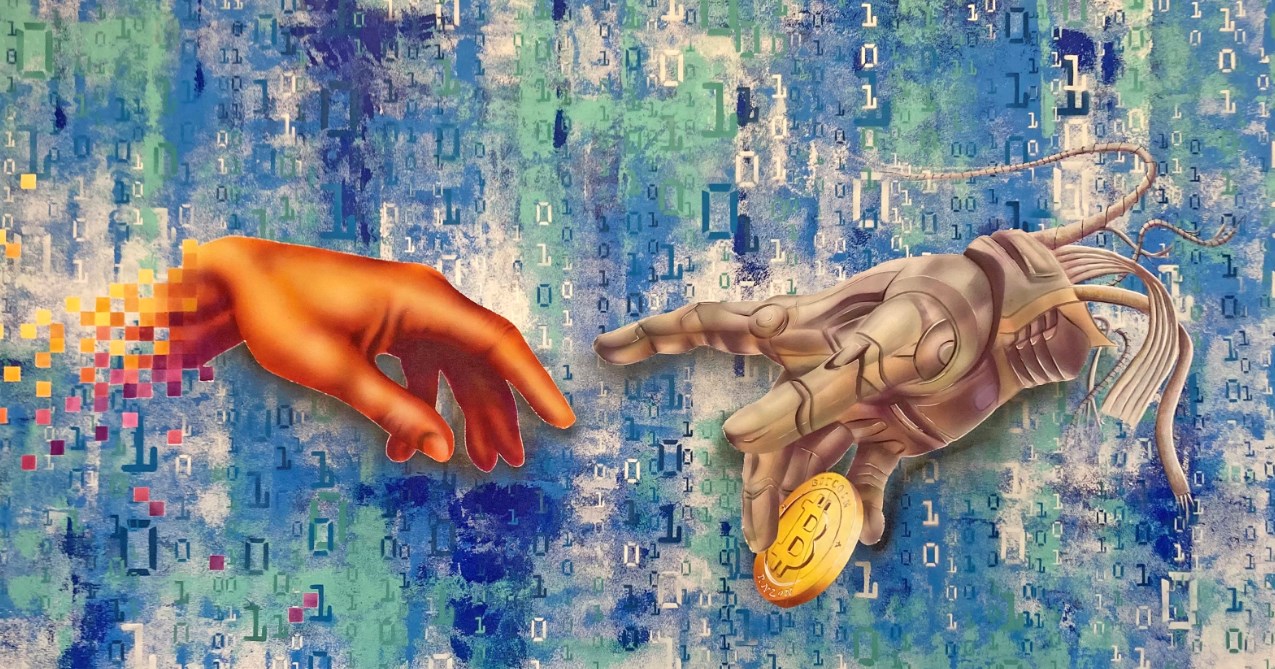