Getting fit on the right track

Fitness fanatics from across the kingdom have taken to the Bahrain International Circuit (BIC) on Thursday evenings during Ramadan to enjoy the fresh air while cycling or running on the world-famous race track.

The Fitness on Track programme comprises three weekly Ramadan special events and is ideal for cyclists looking for a safe environment and runners in search of a challenging and eminent setting.

In its first iteration, more than 100 people cycled, ran and walked at the BIC, while the second event drew 220 individuals.

“We have been coming to the Formula 1 race in Bahrain for four years now, and to be able to ride on the same track is incredible,” said Peter Naylor, 60, who was at the track with his daughter Katie.

“There are parts of the track we haven’t seen up close until this programme started because they are not visible from the grand stand and the TVs only show them occasionally.”

The Batelco Ramadan Special events kicked off on April 22, followed by one last weekend and will conclude with the final iteration on Friday evening from 5.30pm to 8.30pm.

As they cycle, run and walk around the track, Formula 1 fans can also get up close with some of the famous corners at the “Home of Motorsport in the Middle East,” including the infamous Turn 4 where Red Bull driver Max Verstappen overtook world champion Lewis Hamilton but then let him pull ahead after going beyond track limits.

After sunset, there are food and beverage trucks offering healthy snacks for fitness enthusiasts looking for a pick-me-up.

Runners and walkers are relegated to the 2.554km Inner Track, while cyclists ride along the 3.543km Outer Track, which was the site of the Rolex Sakhir 2020 Grand Prix in December last year. There is also a dedicated area for children’s cycling.

“What caught me by surprise on the cycling track were the hills, which gave us a good challenge,” Katie added.

The Ramadan programme comes on the heels of a test event held earlier this year for cyclists, who showed significant interest as roads have become increasingly dangerous for bike riders.

In November last year, British expat Allan Sword died while cycling with friends near Hamala after a car collided with his bicycle.

The 49-year-old Bank ABC’s chief operating officer’s death sparked much debate and investigations to ascertain how Bahrain can make its roads safer, by introducing bicycle lanes.

In March, 19-year-old Mohammed Haneen died in a collision with a car on the Dry Dock Highway in Hidd.

While authorities investigate and roll out bicycle lanes, the BIC is offering a safe space for families and riders to enjoy cycling in the evening. In fact, according to a BIC spokesperson, the circuit is looking into continuing the fitness event after Eid, possibly in the morning, to encourage people of all ages to exercise consistently.

“There are not many places to cycle safely in Bahrain and we have been sharing this news with all our friends,” said  Debbie Howard, 39, who was at the track with her husband, Brian, and their friend, Chrys Pantazis.

“I haven’t exercised in the last year, so it’s great to see people here – some of whom we know previously – riding and enjoying the track.”

“We’d love it if this became a regular event!” Brian added.

The event is open only to Covid-vaccinated and Covid-19 recovered adults, with entry for children under the age of 18 permitted when accompanied by a qualifying adult.

Those interested in attending must pre-register and pay in advance at bahraingp.com. Cyclists pay BD2 per person, while those on foot pay BD1. Those under the age of 12 can take part for free if accompanied by a paying adult. 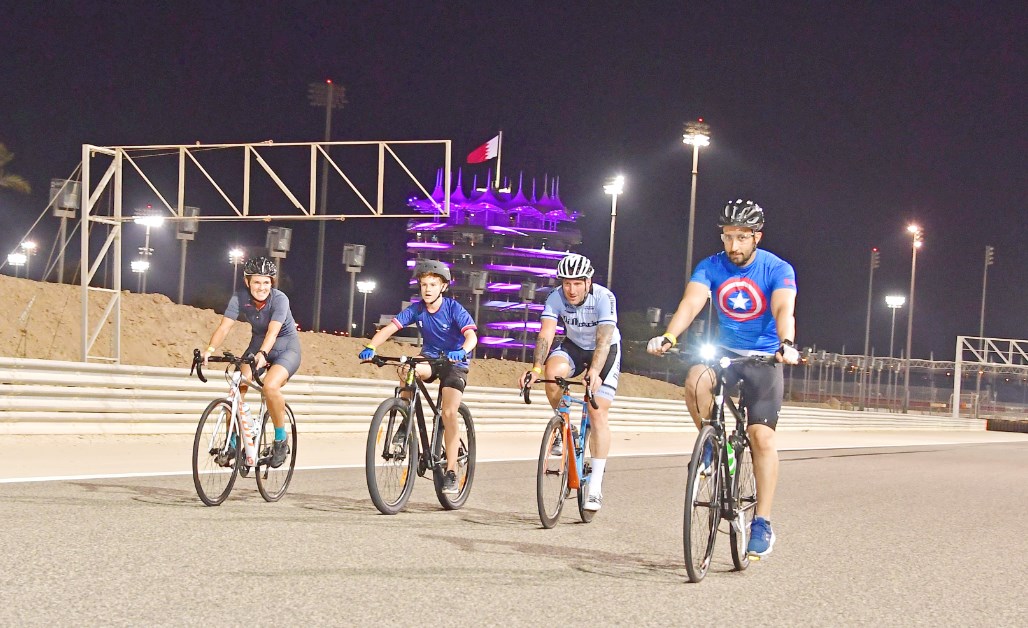 Getting fit on the right track