American two-time Paralympian and TEDx motivational speaker John Register inspired para athletes from across the globe in Bahrain during the Asian Youth Para Games with the message of empowerment and self-love.

The 56-year-old from Colorado Springs moved 40 young para athletes on November 30 at the Art Hotel & Resort in Amwaj Islands with his ‘Hurdle Adversity: Embrace a New Mindset’ talk in which he shared his story from being an Olympian to a Paralympian … and how anything is possible if you put your mind to it.

“I was so excited to meet the para athletes in Bahrain,” said Register, who was flown in by the US Embassy in Bahrain to meet and motivate people from all walks of life.

“My message to all these athletes is also for them to use the power they have to push into different spaces and be entrepreneurs if they want,” he said.

“There is no reason why they cannot do it. Overall, we don’t need someone to do for us, we need to do for ourselves and we need access. So if you don’t have that in your country, we want to make sure that you are pushing in those spaces to build the access.”

During his one-day visit to Bahrain, he met with 80 students at the Arabian Pearl Gulf School for a talk and question-and-answer session, and later conducted a presentation at the Naval Support Activity Bahrain base.

He also toured Bahrain Mobility International where he was impressed by the centre and its support for people with disabilities and hopes to share their model for inclusivity in his talks around the world.

“Whenever you can really inspire youth and get them to see that it is OK to be who they are, then that is amazing,” he added. “I shared how I was an Olympic athlete and a Paralympic athlete – so I had it best on both sides and there is no difference – an athlete is an athlete.

“You choose what you want your destination to be! Go after it; go hard for it and you will achieve it.”

The father-of-four was a four-time all-American graduate of the University of Arkansas who served six years in the US Army where he participated in the army’s World Class Athlete Programme. He won nine gold medals in the Armed Services Competition and two World Military Championships.

When he was 29, he was on his way to the Officer Candidate School when a misstep over a hurdle changed his life.

He dislocated his left knee, severing the artery behind the kneecap. Seven days later, he became an amputee.

“It was kind of my lowest moment,” said Register. “I was contemplating who I was and what my identity was. I questioned whether my wife, Alice, who is now a flight attendant, would stay with me as I saw many military families break apart because of injuries and war.

“So many questions. Alice saw me struggling and told me that we would get through this together and how this was just our ‘new normal’ now. With that mind-set, I began to re-tool and that changed my world.”

Register started swimming to aid in his recovery and made the US Paralympic Team in 1996 in Barcelona where he competed in different styles and relay teams. While at the Games, he watched other athletes compete in artificial limbs and decided to get his own.

He then joined the track and field athletics US Paralympic teams where he won a silver medal in the long jump - as he set an American record - and sprinted to fifth in the 100 metres and 200 metres at Games in Sydney.

Register also founded the US Olympic Committee Paralympic Military Sports Programme in the early 2000s which prompted other programmes such as Prince Harry’s Invictus Games, an international sporting event for wounded, injured and sick service personnel.

He also launched a book titled 10 Stories to Impact Any Leader: Journal Your Way to Leadership Success and founded a company called Inspired Communications International.

His vision is to inspire the world with the mission to help business professionals hurdle adversity, amputate fear and to embrace a ‘new normal’ mind-set to win life’s medals.

Register later travelled to Dubai to share his message at the Expo 2020 on International Day of Persons with Disabilities, marked globally on December 3, before heading back to the US for further tours and talks. 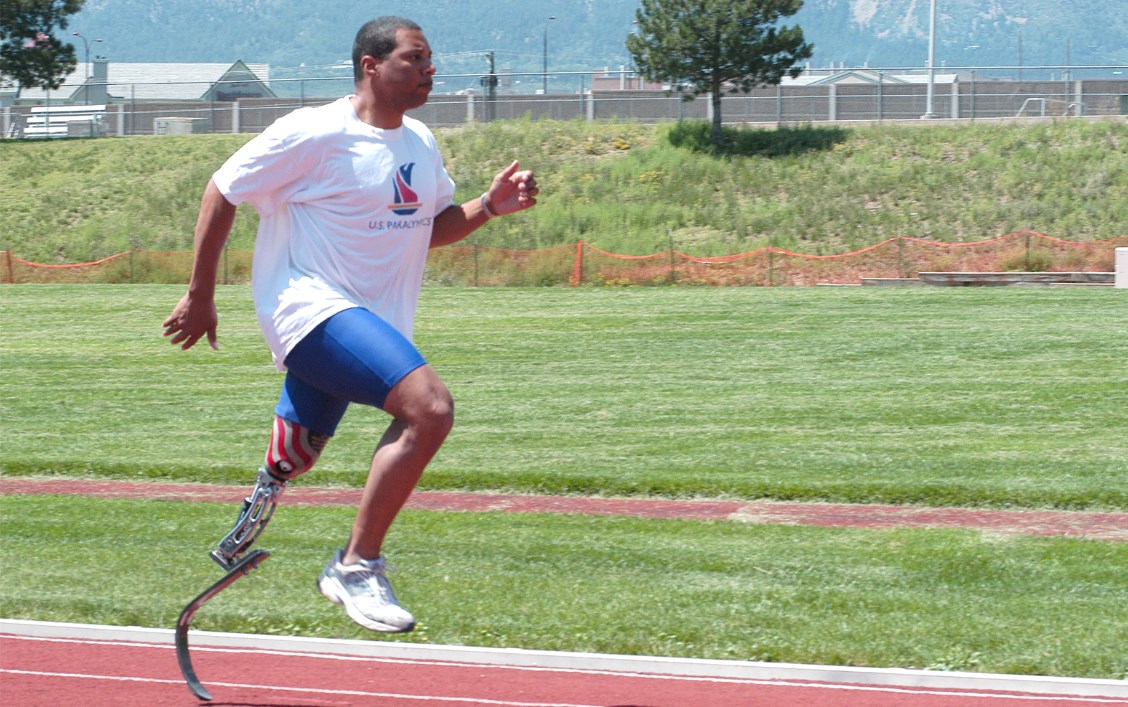