It would not be an overstatement to say that director Spike Lee has a soft yet widely heard voice in Black Hollywood and the modern civil rights movement. The 63-year-old African-American director and producer has used his illustrious career and nuanced director’s touch to show a side of American history that has been omitted in its public schools for decades.

His latest military drama, Da 5 Bloods, is yet another notch in this belt, as he gives the uninitiated an inside look at the African-American participation in the Vietnam war.

The movie starts with a cold open, courtesy of the late and great Muhammad Ali – an outspokenly anti-Vietnam War black presence at a time when 32 per cent of the American armed forces in the country were comprised of Black Americans, who, back home were only 11 pc of the population.

His words echo timelessly, just as relevant today as they were 40 years ago: “My conscience won’t let me go shoot my brother, or some darker people, or some poor hungry people in the mud, for big powerful America. And shoot them for what? They never lynched me. They didn’t put no dogs on me. They didn’t rob me of my nationality.”

We then get a quick history lesson on the African-American participation in the unpopular Vietnam War before being introduced to our five adventurers – Paul (Delroy Lindo), his son David (Jonathan Majors), Otis (Clarke Peters), Eddie (Norm Lewis) and Melvin (Isiah Whitlock Jr.).

Paul, Otis, Eddie and Melvin return to modern-day Vietnam for the first time since the war, along with Paul’s son David, to find the remains of their fallen comrade Norman (Chadwick Boseman) as well as a cache of gold they had found and buried during the war.

Of course, the journey is more about finding themselves than their friend or the “bloody” gold.

And Spike Lee accomplishes that and more over the two-and-a-half-hour runtime of this movie, which bends and blends genres smoother than a Magic Bullet blender makes smoothies.

Comedy, drama, survival, historically accurate war stories and adventure come together to make this akin to a Bollywood masala movie at times, but without losing the gravity of the moment.

The plot itself is straightforward much like Spike’s other movies but there is a lot of freewheeling dialogue and personality which brings in every relevant issue of our time – opioids, interracial romance, Trump, mental health, financial ruin – you see it in the news, Spike probably has a throwaway line about it.

Amongst the highlights of this movie is the nuanced storytelling, which shows how deeply dividing wars can be, years and even decades after they were fought.

The Vietnamese characters, whether it is Otis’ former flame Tiên (Lê Y Lan), his long-lost daughter Michon (Sandy Hương Phạm) radio personality Hanoi Hannah (Veronica Ngo) or the various townspeople they encounter on their journey all have their unique perspective on the war, informed by their communal perspective and marred by the blood of those they lost during the war.

Even though this movie is a love letter to fallen African-American soldiers, Spike is not kind to the main characters, illustrating their cardinal sins - pride, greed, wrath, envy, lust, gluttony, and sloth in a brutal yet also humane manner.

Yet, he is subtle with his director’s hands. Flashbacks are illustrated with a switch to a 4:3 screen aspect ratio, the music conveys the inner dialogues of the characters and even when he is being in your face with a message about humanity, he is sly and layered about it.

All in all, this is a great, albeit somber way to spend an evening learning more about some of the issues that continue to fuel protests across modern America, while enjoying a Spike Lee adventure, no matter how ludicrous it can feel at times. 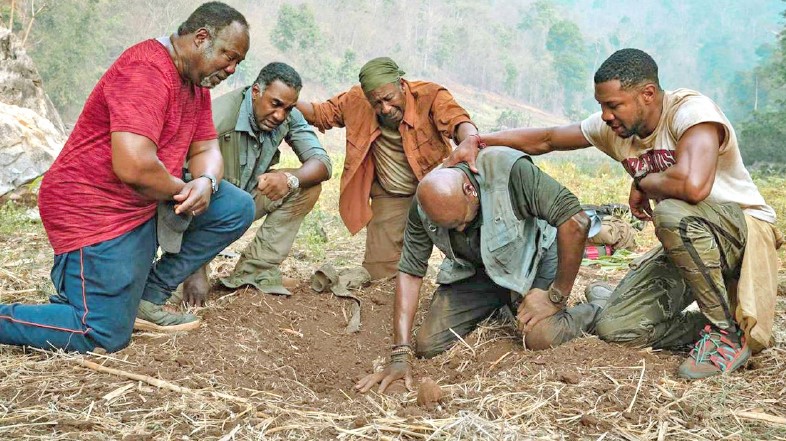