Three stunning works of art that explore the relationship that individuals have with their environment, family and themselves have won the top prize at a major exhibition.

Featuring art pieces by 57 Bahraini and resident artists, the event is being held at the Bahrain National Theatre.

“I am very grateful to have won the Al Dana award, and for having a platform to explore, contemplate and work on research-based projects,” Mariam, 30, told GulfWeekly.

“My photographic piece was inspired by the relationship between people and the surrounding environment, as well as the importance of water in forming the communities around it.

“I have always been fascinated by the connection between the human being and the place, how each affects the other and influences culture, identity, and environment.”

Mariam’s piece comprises three photo collages of a dried natural spring on Nabih Saleh island and a video. She examines water as a medium of ‘politics and poetics’ through which stories are told.

Ahmed’s series of mixed media pieces, comprised of childlike scrawls, explores the relationship an individual has with their family.

And Jumana’s piece, titled Side Effects, delves into the relationship a person has with their mind and internal self.

It consists of prescription leaflets for mental health medication, with everything but the side-effects of each medicine blacked out.

“This piece was inspired by my own personal experience, as well as, what my loved ones went through, during our struggles with mental health,” the 26-year-old artist who lives in Tubli explained.

“I was trying to convey the question ‘Is our healing worth the side effects?’ because a side effect of healing is that these medications can sometimes change core parts of our personalities.

“So anyone undertaking this journey faces the dilemma of whether it’s worth it.

“I started with just three leaflets, but thanks to my Instagram followers, it grew to dozens and the piece is now taller than me!

“To be honest, I did not consider myself an artist until this exhibition, but it has now inspired me to take my art much more seriously, and build on this success with more work.”

The exhibition, which runs until December, encompasses numerous other art styles, including mixed media paintings, video installations, photography and sculptures, to name a few.

A special exhibition will be running alongside BAFA, titled Khalifa bin Salman - A Presence Renewed with Love from 1972-2020 dedicated to the late Premier HRH Prince Khalifa bin Salman Al Khalifa. It features photographs and a documentary film covering the previous 46 editions of BAFA and words from Prince Khalifa about the event he patronised since its inception in 1972. 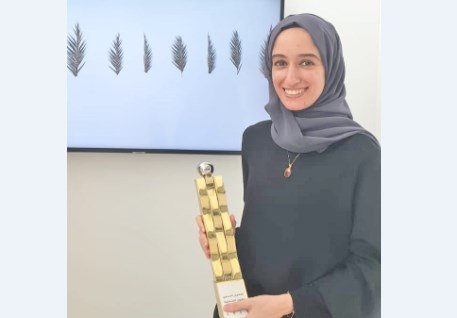