The kingdom’s overwhelming generosity during the Afghan refugee appeal inspired other charitable entities such as OneHeartBahrain to launch a new initiative to spread goodwill across the kingdom.

The social media campaign was launched in September 2019 by social strategist Birthe van der Heijden, a Bahrain resident who believes in spreading awareness about the beauty of diversity and how we are stronger together.

Spurred on by the Afghan crisis, the 100-membered group formed the From Community to Community project, which aims to bring people together to work as one for a cause.

“The recent Afghan refugee appeal created a mountain of goods,  which was distributed amongst local charitable entities,” explained the Dutch mother-of-three who is a teacher in meditation practice. “However, the volume was so high that even local charities had inadequate space to store or immediately distribute them,” the Saar resident said.

“So, when we were approached, we thought we cannot let these goods go to waste as there are so many needy people around us who would greatly benefit from them.”

Bahrain had helped in evacuation efforts of Afghans by allowing flights from Kabul to use Isa Air Base as a transit point, following the swift takeover by the Taliban that culminated in the capture of Kabul on August 15.

A message had circulated on social media on August 24 in Bahrain, urging people to donate essential items such as clothes, toys, diapers, shoes and milk to Afghan evacuees in Bahrain and people from all walks of life happily complied, including schools and social clubs.

“So you could say that it all started with the Afghan community in need, which then spurred the Bahrain community into action,” added Birthe. “We continued that loving action by ensuring these goods find a right home for people in Bahrain. We were encouraged by how many people and communities took part and donated towards the Afghan appeal, that we wanted to continue this collaborative approach to serve people in need, and work together with other charities, groups and organisations, to create solutions.”

The main goal of the From Community to Community initiative is to form a network of support around socio-economic problems in Bahrain and do more beyond the immediate scope.

Since the campaign started, OneHeart members have received support from their regular big-hearted contributors as well as from an array of clubs, societies and organisations such as the Bahrain Rugby Football Club, the National Evangelical Church, the French Association of Bahrain, the Bahrain Marathon Relay Organising Committee, the American Women’s Association, the Bangladesh Community, LuLu Hypermarket and the Saturday Biriyani Party.

“We recently heard about a labour camp that had been struggling without an income and needed extra support,” said Birthe.

Besides the usual LuLu box donations provided by the public, fresh vegetables were provided through a private donor and second-hand clothing came from the Afghan collection made at the Bahrain Rugby Football Club.

“Unfortunately this camp is not an isolated case,” added Birthe. “Therefore, we cannot rest here and will continue to move on to other camps, groups, families and individuals.

“We do not see this campaign as having an end point, but rather as an ongoing effort towards strengthening this country and reminding each other about the force of goodwill in Bahrain.

“For our #fromcommunity-tocommunity campaign, we would love to hear from any other groups and organisations who would like to collaborate with us. Together we can do so much more. We can help each other. Our door is always open to working with others.”

The group has secured a free storage space for second-hand goods. However, there are no air-conditioners and the space is too small to sort items into a proper inventory. Therefore, they are looking for someone to either sponsor the rent or offer them larger storage space or a warehouse with AC. 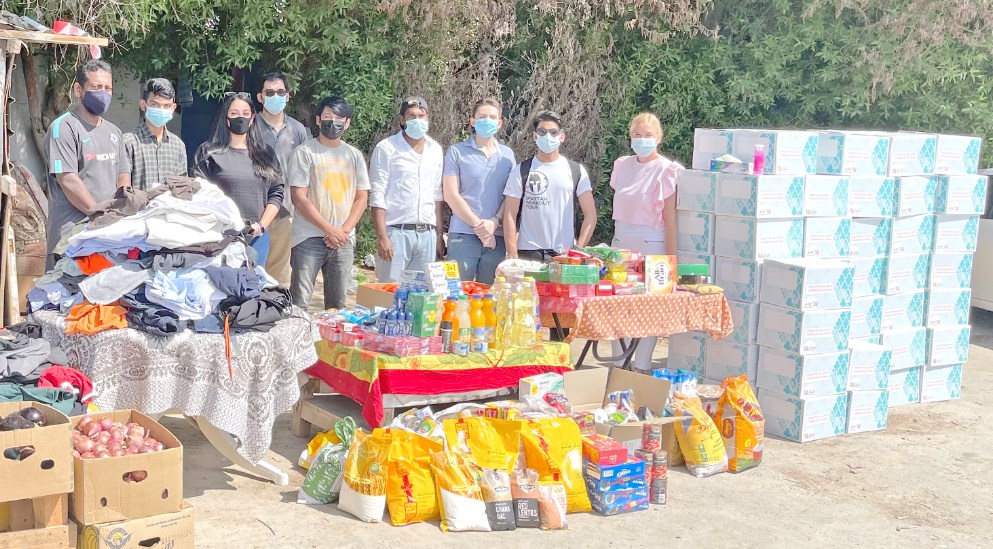