EARLIER this year, the Pertamina Mandalika International Street Circuit in Lombok played host to the first MotoGP race in Indonesia in 25 years, receiving high praise from the world’s best riders and bringing pride to its developer.

The track was designed - and will be operated for the next eight years - by Bahrain-based motoring consultant Mark Hughes, the founder and managing director of Mrk1 Consulting.

According to Hughes, it’s a project they had been working on for some time and what made it unique wasn’t just its track design, but also that it was created at a time when there was no other street circuit for MotoGP.

Hughes had been approached in 2017 to support colleagues in a discussion with the Director of the Indonesian Tourism Development Corporation (ITDC) and the rest is history.

“The conversation started in a very similar fashion to those we have with a lot of clients,” explained the 50-year-old former Bahrain International Circuit (BIC) operations director living in Janusan, who has more than 20 years’ experience in motorsport.

“The client has land and would like to consider the addition of a motorsport destination as part of a wider development. This in itself isn’t unusual. The unusual part came when ITDC said they’d like a street circuit and one that could host MotoGP.

“This had never been done before as the challenges around safety for MotoGP are incredibly demanding, with a need for large run-off areas, something traditional street circuits do not have. However, we were essentially given a 200Ha blank sheet of paper with very few constraints.”

Although that made the challenge a little easier, they had to discuss the possibility of a race with Dorna, the commercial owners of MotoGP.

“Indonesia was a destination that they wanted to revisit, having not raced there for 25 years,” said Hughes. “There had been many false starts over the years but together with the ITDC, we convinced them that this was a genuine project.”

Riders, including multiple world champion Mick Doohan, also shared inputs. All this resulted in a track loved by many, including MotoGP World Champion, Fabio Quatararo, who told Hughes “this is a big balls track, well done!”

The street circuit is 4.313km long, has 17 corners and was launched with the 2021 World Superbike race (WSBK) ... under horrendous weather conditions. Despite the rainfall, riders pressed on and the feedback for grip and drainage was exceptional.

“The feedback post the 2021 WSBK race was extraordinary,” said Hughes. “The race weekend saw torrential wet weather but nonetheless the drainage and asphalt coped and we saw wheel to wheel racing that decided the championship.”

The first MotoGP race in 2022 also went well with Brad Binder, MotoGP KTM Factory Rider, saying: “There isn’t much that compares to Mandalika….so many high speed corners and direction changes and I really enjoyed it.”

In 2022, the Mandalika Grand Prix Association, the track operator, decided to explore an FIA Grade 2 licence for the circuit to accommodate four-wheel racing as well as leave the circuit in place for the longer term, negating the temporary nature of the track and its “street circuit” credentials.

A decision was also made to resurface the track prior to the 2022 World Superbike Race held this month. Dromo assisted the original construction company PP Pereso with the re-surfacing of the track in preparation for the race.

“We are delighted to see that the new surface and the perfect weather combined to create another nail-biting round of the World Superbike Championship and for the second year in succession, the championship was decided on the island of Lombok, Indonesia,” said Hughes.

“The original visionaries of this track are incredibly proud to have turned an extraordinary idea into reality and to see the Mandalika Circuit continue to be utilised for international events.” 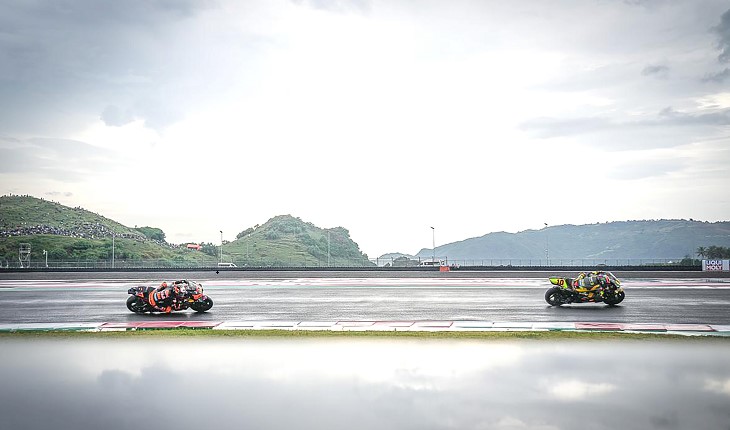