Dates for the dairy

Singer Sandi Thom will be performing at the Bahrain Rugby Football Club on March 29 to raise funds for The Dogfather Rescue Centre. The event will start at 6pm and will also feature performances by Ahmed ‘AQ’ Al Qasim, Paddy Wall, Faith Adu and DJ Mysterioo Arif. There are stalls available to book and visitors can win prizes in a raffle. Tickets are priced BD2 for non-members and it’s free entry for members.

The Rotary Club of Manama’s annual 6-A-Side Football ‘Kick For A Cause’ charity tournament will take place on March 22 from 3pm onwards at the Bahrain Rugby Football Club.

Film: On Body and Soul

Plot: No sooner does Mária start work in a slaughterhouse in Budapest as the new quality controller than the whispers begin. At lunch the young woman always chooses a table on her own in the sterile canteen where she sits in silence. Her slightly older boss Endre is also the quiet type. Tentatively, they begin to get to know each other. Recognising their spiritual kinship, they are amazed to discover that they even have the same dreams at night. Carefully, they attempt to make them come true. 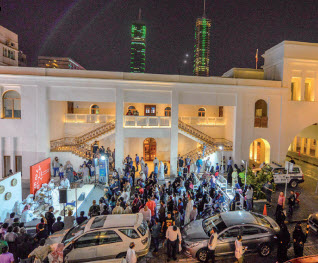 Dates for the dairy